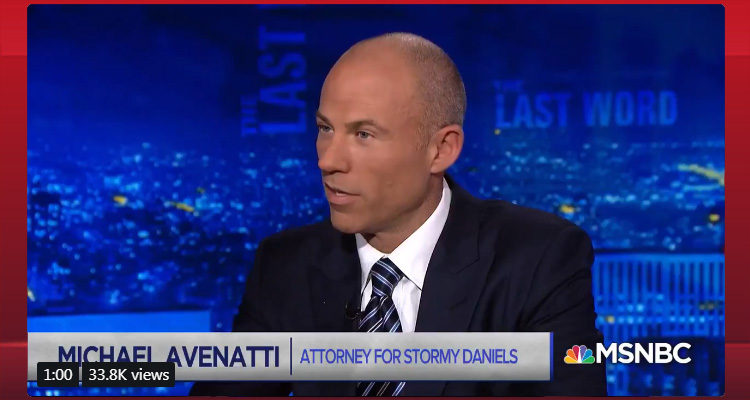 Stormy Daniels’ attorney, Michael Avenatti, just dropped what might be the biggest bombshell of the year – so far – speaking with MSNBC’s Lawrence O’Donnell.

Asked by O’Donnell if he was aware of any communication with Stormy Daniels or her legal counsel in October 2016 as they were closing the settlement agreement that involved the timing of the campaign.

Avenatti responded that “there were extensive communications” between Trump’s personal attorney, Michael Cohen, and Keith Davidson, who was working as Daniels’s attorney at the time.

“There were extensive communications between Michael Cohen and Keith Davidson in October 2016 relating to the timing of this payment and the need for this payment to be made prior to the election,” Avenatti said, adding: “Extensive communications relating to the need for the payment to be made, when it was made and as to related to potential influence on the election.”.

Avenatti went on to stress the fact that everyone involved in the agreement “knew the importance of the payment as it related to the election.”

Joyce Alene, a former federal prosecutor, University of Alabama law professor and MSNBC contributor weighed in, noting that: “No word on whether there’s evidence of the knowledge & intent necessary to prove a criminal campaign finance violation.”

One thing seems certain, however: so far Avenatti has been batting 100% on all his predictions and statements regarding the case as things have begun unraveling for Cohen and the White House.

Michael Avenatti tells @Lawrence communication between Stormy’s then-lawyer & Michael Cohen will establish payment to her was made to influence the election. No word on whether there’s evidence of the knowledge & intent necessary to prove a criminal campaign finance violation.

You can watch the exchange between Avenatti and O’Donnell below:

🚨 BREAKING: @MichaelAvenatti tells @Lawrence there were communications the payment to Stormy Daniels had to be made in advance of the 2016 election. pic.twitter.com/6V8DomUguH