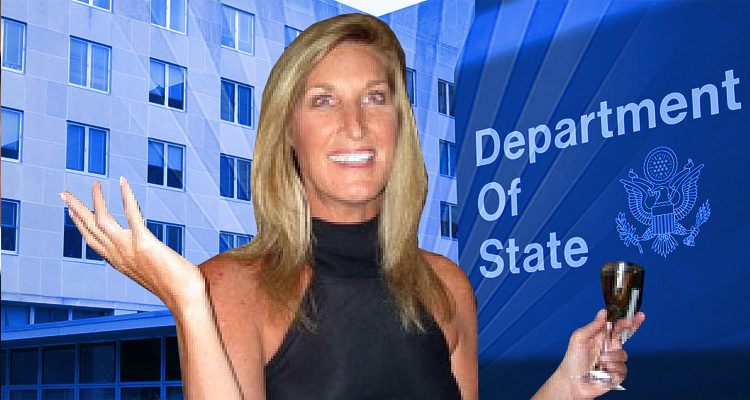 Creation of a Loyalty List prompts an exodus of top-level career diplomats serving in the United Nations and State Department.

An exodus of top career staffers in the State Department is happening in response to a Trump appointee’s efforts to discover employees not loyal to Trump and his agenda.

The Hill reported that: “A senior adviser at the State Department has been quietly vetting employees for months on their loyalty to President Trump, including reviewing social media posts to determine their political leanings.”

Mari Stull, a senior adviser at the agency’s Bureau of International Organization Affairs, has examined staffers’ social media for any signs of differences with administration policy.

Mari Stull, a former food and beverage lobbyist-turned-wine blogger under the name “Vino Vixen,” has reviewed the social media pages of State Department staffers for signs of ideological deviation. She has researched the names of government officials to determine whether they signed off on Obama-era policies — though signing off does not mean officials personally endorsed them but merely cleared them through the bureaucratic chain. And she has inquired about Americans employed by international agencies, including the World Health Organization and the United Nations, asking their colleagues when they were hired and by whom, according the officials.

“She is actively making lists and gathering intel,” said one of the sources, a senior diplomat. Stull was named in April as a senior advisor to the State Department’s Bureau of International Organization Affairs, which manages U.S. diplomatic relations with the United Nations and other international institutions.

Her probing, along with a highly secretive management style, has become so uncomfortable that at least three senior officials are poised to leave the bureau, according to the sources. Officials there have warned some Americans employed by the U.N. to sidestep traditional meet-and-greet sessions with the department’s upper management to avoid drawing attention to themselves.

“She is gunning for American citizens in the U.N. to see if they are toeing the line,” the diplomatic source added.

The Hill reported that: “Some of her efforts reportedly include researching whether employees had signed off on Obama administration policies opposed by the Trump administration, even if the staffer did not personally back the policy,” adding that:

News of Stull’s efforts come months after Democratic lawmakers alleged in a letter that the White House and State Department were conspiring with conservative activists to purge agency employees seen as disloyal to Trump or supportive of the Obama administration.

“We have obtained extremely disturbing new documents from a whistleblower indicating that high-level officials at the White House and State Department worked with a network of conservative activists to conduct a “cleaning” of employees [disloyal to Trump],” Reps. Elijah Cummings (D-M.D.) and Eliot Engel (D-N.Y.) wrote in March.

The targeting of non-partisan, career federal workers based on their perceived political loyalties has been a key feature of the Trump administration and of the State Department in particular. Under former Secretary of State Rex Tillerson, who was fired by Trump in March, political appointees worked to sideline career employees who had worked on Obama administration priorities like the Iran nuclear deal, the closure of the Guantanamo Bay prison, and the resettlement of refugees. Many of them were forced out of their roles and reassigned to low-level work processing Freedom of Information Act requests.

Under Pompeo, the “FOIA surge” has ended. But State Department sources and members of Congress tell TPM they remain concerned about the administration’s attempts to politicize the career civilian workforce, and the allegations have trigged ongoing internal investigations.

Rep. Eliot Engel (D-NY), the top Democrat on the House committee that oversees the State Department, told Talking Points Memo that “This conduct is totally unacceptable, and adds to my concern about the treatment of career personnel by this Administration.