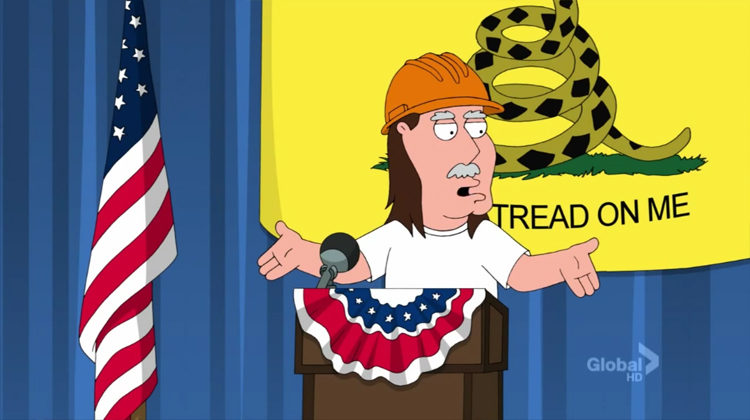 Peter joins the Tea Party and successfully shuts down the government in response to Town Hall shutting down his business.

The producers of the animated Fox hit series Family Guy decided to devote an entire episode to trashing the Tea Party. The episode originally aired on May 13, 2012 and was entitled “Tea Peter”.

In this episode, Peter joined the Tea Party and successfully shut down the government.  However, as the show progresses – things did not turn out as Peter expected and he had to find a way to return things to the way they were before.

As TV Guide reports: “Peter joins the Tea Party and campaigns to shut down Quahog’s municipal government after his illegal business is shut down. His campaign succeeds, but it’s his tycoon father-in-law, Carter Pewterschmidt, who reaps the benefits.”

The short-lived end to municipal government was initially celebrated by the citizens of Quahog who take advantage of their new freedom from government in a variety of strange ways such as Quagmire marrying and impregnating a giraffe. Chris overdoses on Mescaline and ends up going to Vegas.

Eventually basic city services like electricity and water are turned off and the citizens start rioting in the streets. Peter eventually calls the town together and convinces them to reform the government after giving a heartfelt speech.

This episode was written by Patrick Meighan and directed by Pete Michels.  You might recall that Patrick Meighan was arrested back in 2011 at the Occupy LA protests.  He chronicled the events in December 2011 and you can read them by clicking here.

Enjoy a highlight, below, and you can go here to view the entire episode.