The Language Of Politics Explained By George Carlin – Video 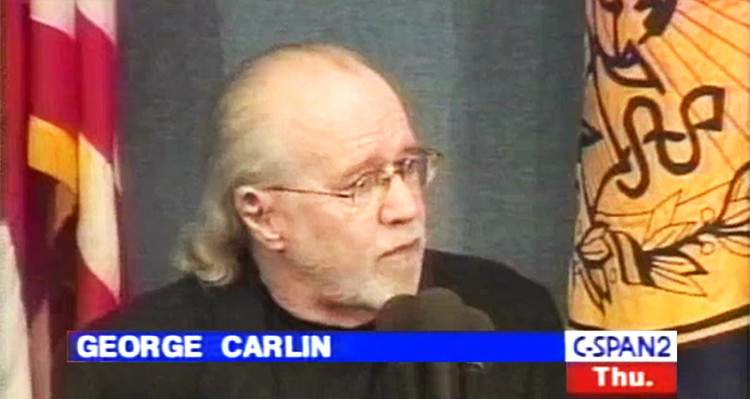 This epic piece on the language of politics was presented by George Carlin at the National Press Club Conference in Washington D.C. in May of 1999.

Carlin was best known for pushing the envelope of free expression with his routine “Seven Words You Can Never Say on Television,” which first appeared on Carlin’s fourth album, Class Clown. It was recorded May 27, 1972 at the Santa Monica Civic Auditorium in Santa Monica, California, and released in September of that year.

Nearly a quarter century after the Supreme Court declared those seven filthy words “indecent” Carlin was invited to speak before the National Press Club on May 19, 1999.

Carlin, who had just turned 62 years old, wasn’t there to regale his audience with any “filthy” or “indecent” words this time. Instead, he kept his audience laughing as he discussed the euphemisms that are unique to Washington, D.C. and politicians.

Carlin, dressed in all-black with his hair in a ponytail, told his audience that he was there to talk about words and not to expound on any particular cause.

“Now having somewhat successfully established my Press credentials and because you and I have at least one thing in common which is that all of us deal with language all the time, I thought it might be nice today for me to come to you with some of my language complaints, certainly not to blame them on you, although of course you are implicated.”

“And not that you can help it, I mean the problem is really with the people you cover. The politicians, the celebrities, and the lawyers, and although their level of insincerity is astonishing, its still kinda fun to hear them talk. In particular it’s fun to listen to Washington talk,” he continued.

Hearing Carlin share his thoughts that day serves as a grim reminder that in nearly 17 years little to nothing has changed in America’s political and cultural landscape. If anything, it’s gotten worse.

You can watch the clip, below, followed by a rough transcription.