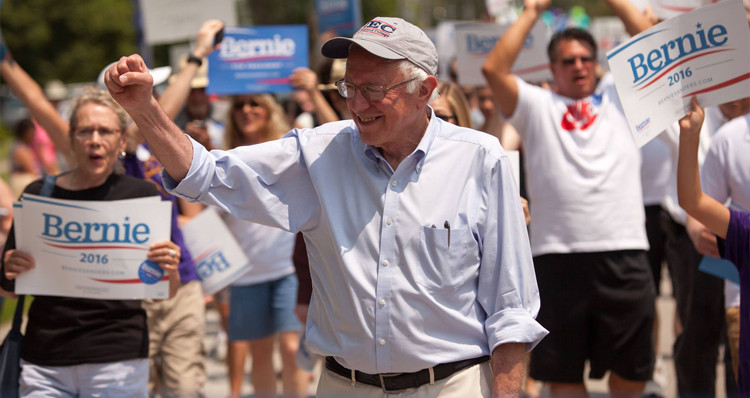 The candidacy of Bernie Sanders has already won by “enlarging America’s political conversation and possibilities,” by beating back elite establishment corporate centrism and by empowering the American progressive movement to learn that they have a voice.

The primary season is in full swing with the Democratic presidential hopefuls expected to battle it out a least until the California primary in June – if not all the way to the convention.

And while the chances of Bernie Sanders receiving the Democratic nomination remain slim, arguably, he has already won – as have American liberals and progressives.

Sanders has always maintained that his goal was to spark “a political revolution,” and as The Nation reported on Wednesday, “Winning the nomination would be nice, but is neither necessary nor sufficient to bring that about.”

“Building a nationwide, durable network of mobilized, active supporters prepared to keep working for universal healthcare, a living wage, ending Wall Street welfare and America’s endless wars—including the drug wars—in numbers great enough to Occupy the Democratic Party and take it back from its corporate funders is absolutely crucial,” D.D. Guttenplan of The Nation explains, adding: “So, too, is the difficult work of stitching together movements like #BlackLivesMatter, Fight for 15, immigrant rights, climate justice, and voting rights into a coalition prepared to march together, vote together, and transform our politics—and our country.”

As The Nation explains, Sander’s great victory in sparking this “political revolution” is in showing us “our own strength,” that we have a voice.

Are the odds against us? Of course. That’s what it means to live inside a rigged system. But remember where we were only a few months ago. With each primary victory—and each close call—Sanders shows us our own strength. With each packed rally we see the claim that socialism is un-American exposed as a lie, that a world where no one starves, healthcare is not rationed by wealth, and energy companies aren’t allowed to rape the earth for profit and leave the rest of us to take the consequences is not only possible but popular.

Sanders has raised massive funds that can now be used “to build an enduring activist infrastructure.”

Raising funds is vital to any “political revolution,” and as Vox reported on Tuesday, “Bernie’s amazing campaign finance engine is the prize.” Sanders has “built a following of dedicated mini donors who gave $20 million in January and then $40 million more in February.” He has shown us an effective way to utilize the internet and social media for fundraising as well as using more traditional methods.

As Vox points out, Sanders is already positioned to start “raising funds to build an enduring activist infrastructure,” with which, “he could do an enormous amount to help anchor the progressive flank of the Democratic Party in Congress.”

Sanders “can help direct his financial fire hose toward down-ballot candidates for whom it really might be a difference maker,” Vox explains, adding: “Stalwart progressive Russ Feingold, for example, is trying to recapture his old Wisconsin Senate seat from a sure-to-be well-financed Ron Johnson, and could surely use an avalanche of small-donor money.”

Money matters more in relatively obscure races where free media coverage is harder to come by, and small-donor money is difficult to obtain in these races for the same reason. If Sanders can help raise money for these kind of candidates, he’ll have a meaningful impact on the 2016 cycle and an even bigger impact on what kinds of candidates get recruited in the first place in 2018, 2020, and beyond.

Sanders has been successful in pushing the Democratic Party back to the left.

Sanders has shown, by example, that it is okay to be a liberal, a progressive, a self-professed Social Democrat. He has reminded the Democratic establishment that it is ‘cool to be cool’, that one doesn’t have to hide from having left-leaning positions on important matters.

As Sally Kohn of CNN reported on Wednesday, “the Democratic Party — and democracy in general — is far stronger thanks to the incredible grassroots groundswell of engagement and passion that has driven Bernie Sanders’ campaign. I have said as much before: Barack Obama’s 2008 race was a campaign masquerading as a movement; Bernie Sanders’ race was truly a movement masquerading as a campaign.”

And whether through millions of small-dollar donations that added up to rival the biggest checks from the biggest donors to the biggest super PACS, or in doggedly making economic inequality and the broken political system core issues of the Democratic platform, the Bernie Sanders movement has and will continue to force a Democratic Party long cowed by centrist blue dogs to return to the populist beating heart of the party’s progressive wing.

It’s no surprise that young voters in particular treat the likes of Sanders and Elizabeth Warren like rock stars. This is the future of the Democratic Party, and incidentally, reflects a populist agenda that resonates across party lines, too. And we can anticipate, if Sanders indeed stays in the race through the convention as he has promised, the progressive wing will continue to raise its voice and concerns — and flex its muscle especially around Clinton’s vice presidential choice.

As The Atlantic reported on Tuesday: “Whether he wins the Democratic Party nomination or not—and his chances are increasingly viable—the candidacy of Bernie Sanders has already won, by vastly enlarging America’s political conversation and possibilities.”

Building on arguments advanced by the Occupy movement and a rising anti-establishment progressivism that has become increasingly forthright about the perils of deregulated capitalism, Sanders has opened up new political space and energy within and outside the Democratic Party. How this energy gets harnessed and directed remains an open question—but it’s more electoral power than progressives have had for decades.

As The Atlantic explained, Sanders campaign is about more than pulling Democratic front-runner Hillary Clinton to the left:

When Sanders highlights Hillary Clinton’s support for disastrous 1990s policies such as NAFTA and welfare repeal, he is not simply denouncing her policy stances—he is taking on the Democratic Party’s larger center-right shift. In the Flint, Michigan debate, Sanders called out the mainstream Democratic Party for aiding deregulatory Clinton initiatives, signaling a larger critique of Democratic centrism. When Sanders criticizes Clinton’s support of the Iraq War and the Patriot Act, he is challenging not only her votes and judgment, but the Democratic Party’s rising militarism and interventionism.

Sanders is tapping into this rich vein of “Enough-is-enough!” outrage and long-simmering alienation in ways that no prominent politician has dared in quite some time. The media emphasis on Sanders’s refreshing authenticity minimizes his deeper importance and resonance: He is not simply speaking with integrity, but speaking truth to power. His phenomenal rise, in the face of staunch (and tone-deaf) opposition from the Democratic Party mainstream, shows that a vast portion of the country is ready for far more significant change than establishment politicians—or most media—dare to admit.

Moving forward, “whether Sanders wins or not, the key question becomes: How will progressives, change-minded Independents, and social movements transform this tremendous political energy into a movement that can demand and exact change?”

Are you ready to come aboard? Let us know your thoughts in the comments, below.