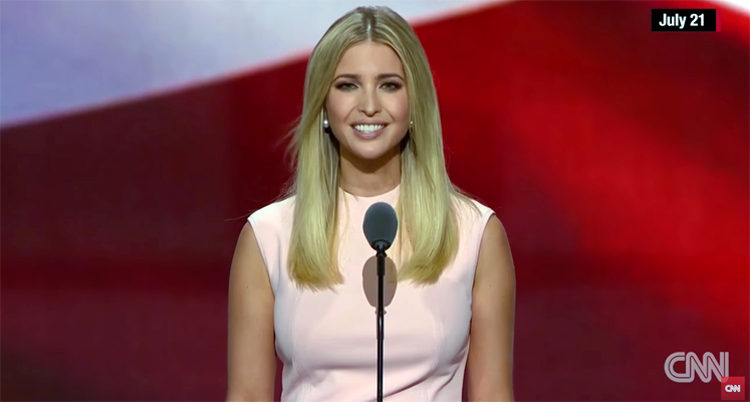 What is it with the Trump campaign and Hillary Clinton?

Ivanka Trump sounded like Hillary Clinton during her speech before the Republican National Convention.

Fast-forward to Thursday and the speech by Donald Trump’s daughter, Ivanka, at the GOP convention.

Attempting to reach out to women voters, Ivanka seemed to channel Hillary Clinton as she spoke of her father’s plan to change labor laws and to pursue universal childcare.

“Politicians talk about wage equality, but my father has made it a practice at his company throughout his entire career,” Ivanka Trump said prior to introducing her father. “He will fight for equal pay for equal work and I will fight for this, too, right alongside of him.”

As CNN reports, “The promises made by Trump’s eldest daughter on the gender equality issue reflect a departure from traditional federal labor policies emphasized by Republican leaders. If true, it would put her father’s agenda closer to that of his Democratic rival, Hillary Clinton, than others in his party.”

And that might be a wise plan, considering that NBC News reports that Trump “is polling far behind Clinton among women. Trump is most popular among white men. A recent NBC News/Wall Street Journal poll found that Democratic challenger Hillary Clinton is beating Trump among women 52 to 35 percent.”

Controversies have surrounded Trump in how he has addressed women. He got into a public, verbal feud with Fox News Host Megyn Kelly, said Republican challenger Carly Fiorina doesn’t have the face to be president, said that pregnancy was an “inconvenience” for employers, and has been accused of sexual assault.

Then there is “The Donald” himself.

The ad features the words, “Donald Trump reveals the truth about Hillary Clinton” and shows Trump saying on FOX News, “Hillary Clinton, I think, is a terrific woman.” In another clip, Trump praises her and Bill Clinton, saying, “I know her very well and I know her husband very well, and I like them both…They are just really terrific people.”

The ad also quotes Trump praising Hillary Clinton as a “smart, tough and a very nice person,” and said, “She really works hard, and I think she does a good job.”

The ad also features a quote of Trump saying in 2008 that Clinton would “make a great president.”

“I know Hillary and I think she’d make a great president,” the ad displays out across the screen.