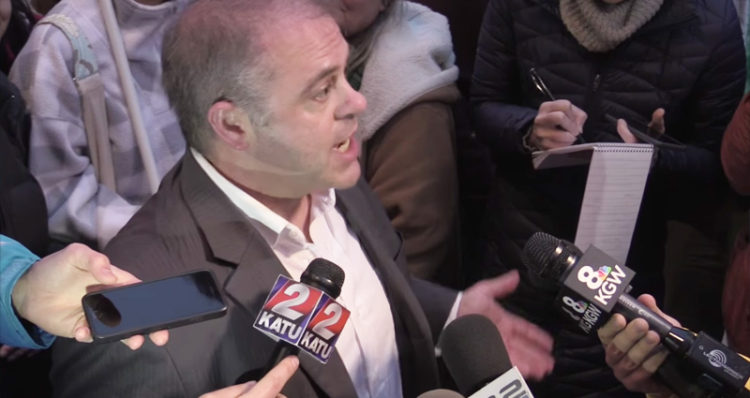 Pandemonium breaks out in a courtroom after an Oregon jury acquits the Oregon occupiers.

This Thursday a Portland, Oregon, jury acquitted “Ammon Bundy, his brother Ryan Bundy and five co-defendants not guilty of conspiring to prevent federal employees from doing their jobs through intimidation, threat or force during the 41-day occupation of the Malheur National Wildlife Refuge,” according to a report by The Oregonian.

However, “the coda to the stunning verdict… was when Ammon Bundy’s lawyer Marcus Mumford argued that his client, dressed in a gray suit and white dress shirt, should be allowed to walk out of the court, a free man.”

As The Oregonian reports, “U.S. District Judge Anna J. Brown told him that there was a U.S. Marshal’s hold on him from a pending federal indictment in Nevada.”

“If there’s a detainer, show me,” Mumford argued before Judge Brown.

What played out next seems more fitting of an episode of Law & Order or a Hollywood movie than real life.

As the Chicago Tribune reports, “Tumult erupted in the courtroom Thursday after the verdicts were read when an attorney for group leader Ammon Bundy demanded his client be immediately released and repeatedly yelled at the judge. U.S. marshals tackled attorney Marcus Mumford to the ground, used a stun gun on him several times and arrested him.”

A separate article by The Oregonian describes the chaos that erupted:

U.S. District Judge Anna J. Brown told him that there was a U.S. Marshal’s hold on him from a pending federal indictment in Nevada.

“No, he’s released on these charges. He’s acquitted. Nevada doesn’t have jurisdiction,” Mumford yelled, standing before the judge. “If there’s a detainer, show me.”

“Mr. Mumford, you really need to never yell at me now or never again,” the judge responded.

Brown told Mumford that she’s releasing Bundy on all federal holds in the Oregon case, but he’ll have to take up any questions about the federal holds from the Nevada case with the U.S. Marshals Service.

“If they want him, they know where to find him,” Mumford told the judge. “I don’t see any paper proving their authority to hold him.”

According to The Oregonian, that was when “a group of about six to seven U.S. Marshals, who had been either standing or seated around the perimeter of the courtroom, slowly moved in and surrounded Mumford at his defense table. The judge directed them to move back but moments later, the marshals grabbed onto him.”

“What are you doing?” Mumford yelled, as he struggled and was taken down to the floor.

As deputy marshals yelled, “Stop resisting,” the judge demanded, “Everybody out of the courtroom now!”

Eric Wahlstrom, a supervising deputy for the U.S. Marshall Service, spoke with The Oregonian, confirming the incident and explaining that Mumford was charged for failure to comply with a lawful federal order and released. he has a January 6, 2017 date to return to federal court to face that charge.

Deputy Wahlstrom went on to explain to The Oregonian that the confrontation between U.S. Marshalls and Mumford occurred because Mumford was actively attempting to prevent Marshalls from taking Ammon Bundy out of the courtroom and back into custody.

Speaking of the use of the stun gun, Wahlstrom explained that no probes were fired into his body, instead a Taser was placed next to his body and activated. As to the reason for the use of a Taser, he stated that Deputy U.S. Marshalls “attempted to handcuff him [Mumford] and he continued to resist.”

Margaret Paris, a University of Oregon law professor and former dean, said she couldn’t believe what happened: “It just blows my mind,” she said, adding: “To have a lawyer who’s making an argument in court physically restrained and taken down is extraordinary. He’s entitled to make these arguments. If he was repeating himself over and over, the more typical response is to hold him in contempt. But to physically accost him is just shocking.”

Matthew Schindler, standby counsel for co-defendant Kenneth Medenbach, explained he thought it was the result of exhaustion on the part of Mumford who had “put out everything he had,” during the past six weeks of the case.

“Unfortunately he let his passion and desire and belief in his client overcome his good judgement,” Schindler told The Oregonian.

You can watch Mumford talking to members of the media shortly after his release from custody: