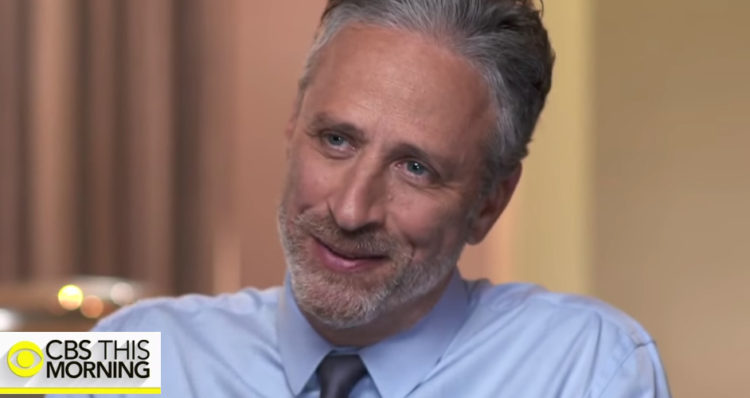 Jon Stewart shares his thoughts on the election and what makes America exceptional.

Jon Stewart is hitting the talk show circuit to promote his new book, an oral history about the more than sixteen years he spent hosting Comedy Central’s “The Daily Show,” and on Wednesday he sat down with CBS News host Charlie Rose for an interview to share his thoughts on the election, America and our history as a nation.

Asked his reaction to the election, Stewart responded that he did not believe the election indicated a fundamental change in who we are as Americans.

“I don’t believe we are a fundamentally different country today than we were two weeks ago,” he explained, adding that “The same country with all its grace and flaws, and volatility, and insecurity, and strength, and resilience exists today as existed two weeks ago. The same country that elected Donald Trump elected Barack Obama.”

Noting that he did “feel badly for the people for whom this election will mean more uncertainty and insecurity,” Stewart took aim at Republicans like Senate Majority Leader Mitch McConnell and House Speaker Paul Ryan for making their careers out of telling the American public that government doesn’t work then going out and doing everything in their power to insure that it doesn’t work.

“The ultimate irony of this election is the cynical strategy of the Republicans, which is: ‘Our position is government doesn’t work. We’re going to make sure that it doesn’t work.’”

In this regard, “Donald Trump is a reaction not just to Democrats, [but] to Republicans,” Stewart explains.

“He is not a Republican. He is a repudiation of Republicans,” he continued, adding that, nevertheless, Republicans “will reap the benefit” of Trump’s victory.

Not letting liberals off the hook, Stewart noted that while they “hate the idea” of typecasting groups of people, such as Muslims, the liberal community has branded everyone who voted for Trump as racist.

“I thought Donald Trump disqualified himself at numerous points,” Stewart remarked, adding: “But there is now this idea that anyone who voted for him has to be defined by the worst of his rhetoric. There are guys in my neighborhood that I love, that I respect, that I think have incredible qualities who are not afraid of Mexicans, and not afraid of Muslims, and not afraid of blacks. They’re afraid of their insurance premiums. In the liberal community, you hate this idea of creating people as a monolith. Don’t look at Muslims as a monolith. They are the individuals and it would be ignorance. But everybody who voted for Trump is a monolith, is a racist. That hypocrisy is also real in our country.”

However, as Variety reports,

Stewart isn’t despairing, though, despite the fact that Trump’s candidacy has given a large voice to, as he put it, “that thought that a multi-ethnic, multicultural democracy is impossible.” “I would rather have this conversation openly and honestly than with dog whistles,” he said. “This is the fight we wage against ourselves and each other. America is not natural. Natural is tribal. We’re fighting against thousands of years of human behavior and history to create something that no one’s ever done. That’s what’s exceptional about America.”

You can watch the full interview, below: