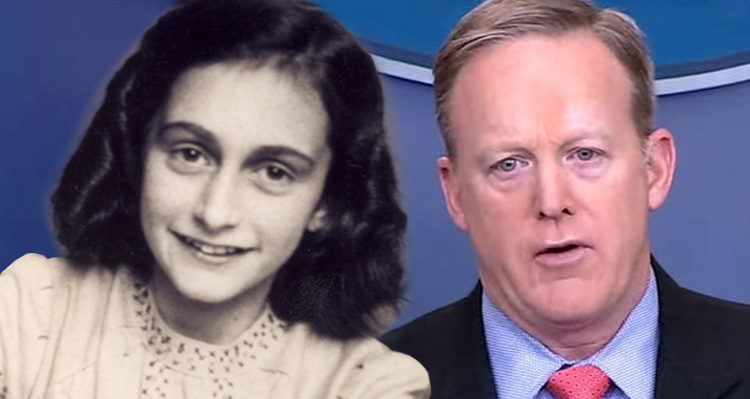 The Anne Frank Center expresses outrage in the wake of Sean Spicer’s outrageous remarks about Hitler and the Holocaust.

The Anne Frank Center for Mutual Respect is calling for Trump to “fire” his “national embarassment” Sean Spicer.

The embattled White House Press Secretary came under fire on Tuesday after he compared Syrian President Bashar al-Assad to Adolf Hitler during Tuesday’s press briefing, claiming that even someone as “despicable” as the infamous dictator “didn’t even sink to using chemical weapons.”

Asked to clarify that remark, Spicer added that Hitler “was not using the gas on his own people the same way Assad used them,” and referencing the German extermination camps added: “There was not — he [Hitler] brought them into the Holocaust Center, I understand that.  But I’m saying in the way that Assad used them, where he went into towns, dropped them down to innocent — into the middle of towns.  It was brought — so the use of it — I appreciate the clarification there.”

Social media exploded in the wake of those remarks with notable individuals such as Chelsea Clinton weighing in on his remarks and House Minority Leader Nancy Pelosi tweeting that: “While Jewish families celebrate Passover, the chief spokesman for this White House is downplaying the horror of the Holocaust. Sean Spicer must be fired, and the President must immediately disavow his spokesman’s statements. Either he is speaking for the President, or the President should have known better than to hire him.”

The Anne Frank Center posted a series of tweets condemning Spicer’s remarks and calling for his immediate termination.

“On Passover no less, Sean Spicer has engaged in Holocaust denial, the most offensive form of fake news imaginable, by denying Hitler gassed millions of Jews to death” the organization’s executive director Steven Goldstein said in a statement posted to Twitter and Facebook.

A couple of hours later, the Center tweeted to Trump: “how does it feel to have a press secretary who engages in Holocaust denial? Fire your national embarrassment.”

.@POTUS @realDonaldTrump how does it feel to have a press secretary who engages in Holocaust denial? Fire your national embarrassment.

And followed that up, tweeting: “Sean Spicer, as we say at Passover, DAYENU! ENOUGH! You need to quit or be fired. #Antisemitism #NeverAgain“

Sean Spicer, as we say at Passover, DAYENU! ENOUGH! You need to quit or be fired. #Antisemitism #NeverAgain

The Center’s most recent tweet addresses Spicer’s reference to German death camps as the “Holocaust Center.”

“Spicer, listen up: Anne Frank and millions of other Jews weren’t killed in “Holocaust Centers.” Most offensive press sec ever. #FireSpicer“

Spicer, listen up: Anne Frank and millions of other Jews weren't killed in "Holocaust Centers." Most offensive press sec ever. #FireSpicer

Ironically, April is Genocide Awareness and Prevention Month; and the Anne Frank Center has been marking “30 genocides in 30 days” on their Twitter account, with their most recent tweet appearing shortly before Spicer’s outrageous remarks.

Genocide Awareness and Prevention Month was adopted in 2011; and, as Minnesota Public Radio explains, April was selected because “The world has witnessed nearly a century of genocides that all began in April. Millions of people perished; cultures were destroyed; communities and nations were ruined.”