#TrumpTeachesHistory Takes The Internet By Storm 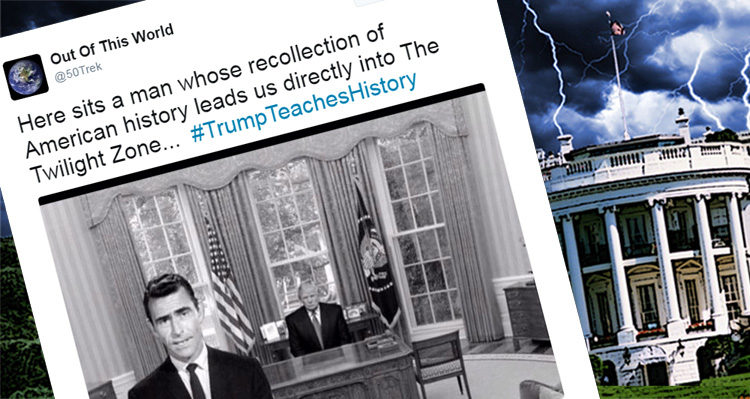 Trump ignites a twitter storm after he falsely claimed that the Civil War could have been avoided had slave owner Andrew Jackson been president at the time.

During an interview for SiriusXM’s “Main Street Meets the Beltway” show, Trump suggested that the Civil War could have been avoided had slave owner Andrew Jackson been president at the time.

The Washington Post offered the following summary of that portion of the interview: “Why couldn’t we all just get along? That’s what President Trump wants to know about the Civil War. In an interview with the Washington Examiner’s Salena Zito, our president-historian posits that the war might not have happened if only Andrew Jackson had still been around. The whole thing apparently could have been avoided if only we had a bona fide negotiator — someone more up to the task than Low Energy Abe Lincoln.”

Chelsea Clinton, daughter of Bill Clinton and Hillary Clinton, led the criticism as Twitter erupted in outrage over Trump’s  suggestion that the Civil War could have been avoided had slave-owner Andrew Jackson been in office at the time.

A CNET reports, “the hashtag #TrumpTeachesHistory (sparked by @midnight with Chris Hardwick) soon imagined the commander-in-chief with a very different vision of historical events.”

For his part, Trump attempted to save face with a Tweet demonstrating he was aware (or at least someone had finally told him) that Jackson had died nearly two decades before the Civil War began.

“President Andrew Jackson, who died 16 years before the Civil War started, saw it coming and was angry. Would never have let it happen!” he tweeted.

President Andrew Jackson, who died 16 years before the Civil War started, saw it coming and was angry. Would never have let it happen!

#TrumpTeachesHistory and questions why there was even a Civil War in the first place. pic.twitter.com/o1TS9WS9vV

Some favorite tweets include this one comparing Trump’s revisionist/alternative fact driven interpretation of history to the old television show “The Twilight Zone.”

Here’s another one referencing a familiar line that was spoken by Lieutenant Colonel Bill Kilgore, played by Robert Duvall, in Francis Ford Coppola’s 1979 film “Apocalypse Now.”

The full quote from the movie reads as follows:

“Smell that? You smell that? Napalm, son. Nothing else in the world smells like that. I love the smell of napalm in the morning. You know, one time we had a hill bombed, for 12 hours. When it was all over, I walked up. We didn’t find one of ‘em, not one stinkin’ dink body. The smell, you know that gasoline smell, the whole hill. Smelled like… Victory. Someday this war’s gonna end…”

#TrumpTeachesHistory I love the smell of Napalm in the morning. pic.twitter.com/O1nq4zycJW

Anyone familiar with the mid-70s to mid-80s television sitcom “The Jeffersons” will appreciate this one:

Harriet Tubman is so tremendous. They wanted her to sit at the front of the bus so she invented the railroad. #TrumpTeachesHistory@midnight

#TrumpTeachesHistory "Andrew Jackson was mad about Civil War". He died 16 years prior. If he was mad at all, it was probably at being dead.

A few other favorites include:

#TrumpTeachesHistory @midnight
The Pilgrims landed on Chrysler-Plymouth to stop Obama from wrecking the auto industry.

#TrumpTeachesHistory I would have gotten the Louisiana Purchase for much. Much less. Those guys didn't even try.