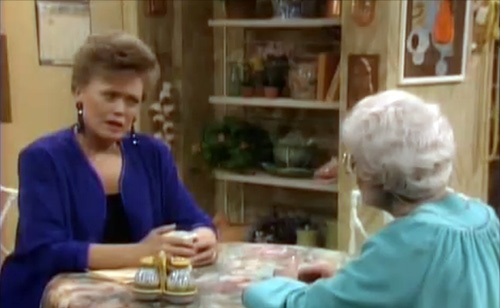 The show was groundbreaking on several fronts – to include not only LGBT issues, but also drug abuse, HIV/AIDS, female sexuality, elder care, immigration policy, death, and assisted suicide.

One episode in particular became well known for Sophia’s explanation of gay marriage in the wake of the news that Blanche’s homosexual brother, Clayton, was planning a commitment ceremony with his boyfriend, Doug.

A 2015 opinion piece published by The Advocate described the 1991 episode, “Sister of the Bride,” as follows:

Although the show’s handling of LGBT issues — including making a transgender politician the punch line of an entire episode — was not perfect, it went far beyond most other sitcoms of the period. One of the main characters — Blanche — has a gay brother who announces that he is engaged to his partner. After Blanche questions why her brother wants to get married, Sophia, the show’s matriarch and oldest character, gives Blanche a now well-known speech on the importance of marriage equality, informing her that her brother and his fiancé want to get married for the same reasons she wanted to marry her husband. “Everyone wants someone to grow old with, and shouldn’t everyone have that chance?” Sophia asks the audience, via Blanche.

For those unfamiliar with the show (too young?):

The series revolves around four older, single women (three widows and one divorcée) sharing a house in Miami, Florida. The owner of the house is a widow named Blanche Devereaux (Rue McClanahan), who was joined by fellow widow Rose Nylund (Betty White) and divorcée Dorothy Zbornak (Bea Arthur) after they both responded to a room-for-rent ad on the bulletin board of a local grocery store. In the pilot episode, the three were joined by Dorothy’s 80-year-old mother, Sophia Petrillo (Estelle Getty), after the retirement home where she lived burned down. Initially, the women had a gay cook named Coco (Charles Levin) who lived with them, but the character was never seen again after the pilot episode. source

The show received positive critical response and, as Wikipedia summarizes “During its original run, The Golden Girls received 68 Emmy nominations, 11 Emmy awards, four Golden Globe Awards, and two Viewers for Quality Television awards. All the lead actresses won Emmy Awards for their performances on the show. The Golden Girls is one of three shows, along with All in the Family and Will and Grace, where all the principal actors have won at least one Emmy Award. As a tribute to the success of The Golden Girls, all four actresses were later named Disney Legends.”

You can watch Sophia in action in the clip below. Isn’t a bit sad to recognize the fact that America still has a long way to go toward accepting equal marriage for all?