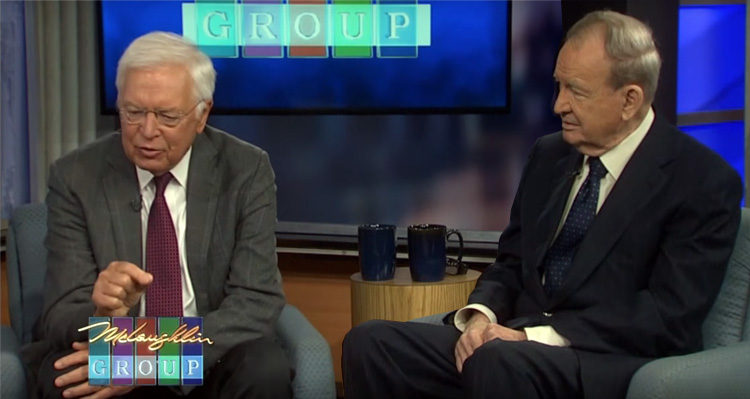 Noted talk show host and former Chairman of the California Democratic Party Bill Press is speaking out about Trump’s base.

Talk radio host, political commentator and author Bill Press appeared as a guest panelist on Sunday’s edition of “The McLaughlin Group,” where he expressed outrage and frustration with Trump’s base – calling them “racist” and “redneck.”

Roughly 6 minutes into the program the group was discussing the Deferred Action for Childhood Arrivals (DACA) program and Trump’s demand for funding for his beloved wall.

The conversation naturally turned to Trump’s base, with Tom Rogan asking the group: “What happens to Trump’s base if he signs up to a DACA deal without getting this border security that he has so promised at his campaign?”

Clarence Page responded: “He’ll get it. Border security is not the hang-up. Democrats have voted for worse – no worse – more severe border security that what they are discussing now. What they don’t want is a wall and Donald Trump has been talking about wall wall wall for the past two years.”

“But Trump’s base wants the wall,” Rogan responded.

Clearly frustrated, Bill Press joined the conversation and ripped into Trump’s base.

“I am sick and tired of talking about Donald Trump’s base,” Press said, adding: “So, you got 35 percent of the most extreme wacko racist — I don’t know — rednecks in the country.”

After a few seconds of cross talk, Press continued, stating: “Let me speak for the average American. Everything is, ‘Oh, this is fine.’ He can say whatever he wants because it pleases his base. He said it best — he could go out on Fifth Avenue and shoot somebody. And his base would say, ‘Good for you, Donald Trump.’ You need more than that base to run a country.”

For those unfamiliar with his work, Press has a career in journalism spanning decades and earning him four Emmy Awards and a Golden Mike Award.

Bill Press began his career as a political insider and media commentator on KABC-TV and KCOP-TV, both in Los Angeles…

The former co-host of MSNBC’s Buchanan and Press, CNN’s Crossfire and The Spin Room, Press has built a national reputation on thought-provoking and humorous insights from the left side of the political aisle.

You can watch him discussing Trump’s base in the video below.