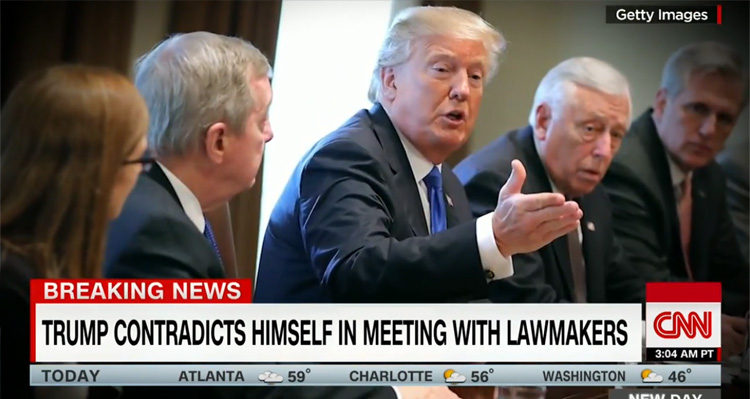 California judge throws a wrench in Trump’s plans to end the Dreamers program.

CNN reported that Judge William Alsup “temporarily blocked” the administration’s efforts to end DACA in a ruling that “came in a challenge to the Department of Homeland Security brought by he University of California and others.”

Alsup wrote in his 49-page ruling that the “plaintiffs have shown that they are likely to succeed on the merits of their claim that the rescission was arbitrary and capricious” and must be set aside pursuant to the federal Administrative Procedures Act.

He went on to state that a nationwide injunction was “appropriate” because “our country has a strong interest in the uniform application of immigration law and policy.”

“Plaintiffs have established injury that reaches beyond the geographical bounds of the Northern District of California. The problem affects every state and territory of the United States,” he wrote.

The Guardian elaborated on the background to the case, reporting that “The Trump administration decided in September to rescind the DACA program, placing the fate of hundreds of thousands of the young immigrants – known as Dreamers – in the hands of Congress. The announcement prompted several states, organisations and individuals to file lawsuits.”

The administration announced the decision on 5 September 2017 and said applicants had 30 days to respond. So while the program has not expired yet – that will happen on 5 March – the deadline had passed to renew applications, thus sealing the applicants’ fate.

In his ruling, Alsup wrote that previous recipients of DACA protections who failed to register by the deadline must be allowed to renew their status in the program. However, he said the federal government did not have to process new applications from people who had never before received protection under the program.

Nearly 22,000 Daca recipients did not successfully apply to renew their eligibility, according to a study by the Center for American Progress, a left-leaning think tank in Washington. The researchers estimate that on average 122 DACA recipients per day will lose their legal protections in the 181 days between 5 September 2017 and 5 March.

“In terminating DACA, the administrative record failed to address the 689,800 young people who had come to rely on DACA to live and to work in this country,” Alsup wrote, adding: “These individuals had submitted substantial personal identifying information to the government, paid hefty fees and planned their lives according to the dictates of DACA. The administrative record includes no consideration to the disruption a rescission would have on the lives of DACA recipients, let alone their families, employers and employees, schools and communities.”

VICE News reported on the “ultimate effect  of the ruling” which remains unclear.

The fate of the Dreamers is currently the subject of fierce debate in Washington, where Republicans and Democrats announced Tuesday they would work together on an immigration bill addressing DACA, border security, the visa lottery system and other issues.

Karen Tumlin, legal director at the National Immigration Law Center, which advocates for immigrants’ rights, said in a statement that while the decision was a relief, Dreamers were owed more clear-cut protection from Congress.

“Dreamers — and our nation — deserve more than temporary relief from the courts; they deserve a bipartisan Dream Act,” she said. “It’s time for Congress to get it done.”

CNN reported that the Department of Justice pushed back against the ruling, questioning “the legality of DACA,” referring to it as “an unlawful circumvention of Congress.”

Department of Justice spokesman Devin O’Malley said that the Department of Homeland Security “acted within its lawful authority in deciding to wind down DACA in an orderly manner,” adding that “the Justice Department will continue to vigorously defend this position, and looks forward to vindicating its position in further litigation.”