Alec Baldwin Mocks Trump With Hope Hicks Dig: ‘She’s like a daughter to me. So smart, so hot.’ – Video 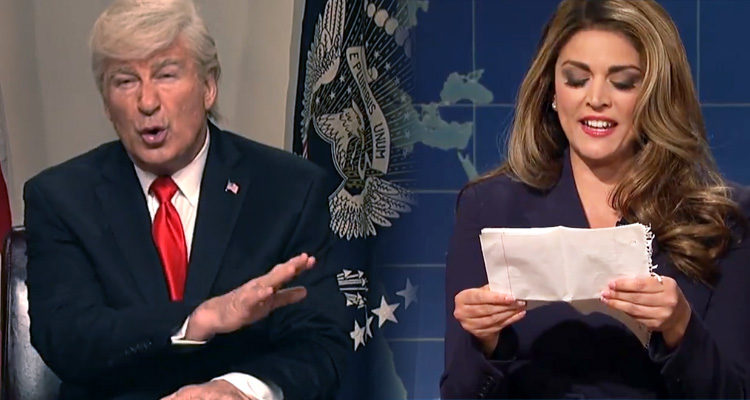 Alec Baldwin has had quite the week with Trump.

Friday morning, Trump took to Twitter to attack Baldwin in what appeared to be a lame attempt to change the national conversation.

“Alec Baldwin, whose dying mediocre career was saved by his terrible impersonation of me on SNL, now says playing me was agony. Alec, it was agony for those who were forced to watch. Bring back Darrell Hammond, funnier and a far greater talent!” he tweeted.

Alec Baldwin, whose dying mediocre career was saved by his terrible impersonation of me on SNL, now says playing me was agony. Alec, it was agony for those who were forced to watch. Bring back Darrell Hammond, funnier and a far greater talent!

As one might expect, that Twitter-tantrum elicited a response from Baldwin who opted to use his foundation’s account instead of his personal one.

Agony though it may be, I’d like to hang in there for the impeachment hearings, the resignation speech, the farewell helicopter ride to Mara-A-Lago. You know. The Good Stuff. That we’ve all been waiting for.

And Mr President…
please ask your wife to stop calling me for SNL tickets.
(Hey, Melania…we’ve got Charles Barkley this Saturday!)

Signing off for now. On my way to shoot MOTHERLESS BROOKLYN and grateful to be working w Edward Norton, Cherry Jones, Willem Dafoe, Bruce Willis, Bobby Canavale, Gugu Mbatha-Raw, Michael K Williams.
If this is mediocrity, give me more.

Then, on Saturday, he returned to Saturday Night Live to give another one of his brilliant cold opens, this time taking on Trump’s recent firearms summit at the White House and mocking Trump over outgoing White House Communications Director Hope Hicks.

As Deadline Hollywood reported: “Alec Baldwin got in the latest jab in his back and forth with Donald Trump tonight, and without the benefit of Twitter. Bringing his Trump impersonation back to Saturday Night Live – the very one Trump tweeted is ‘agony’ to watch – Baldwin riffed on everything from North Korea to Hope Hicks, and his Trump only had to look at a note card once (to read ‘I hear you and I care’).”

Baldwin began his Trump impersonation, spoofing him talking about gun-related issues raised in the wake of last month’s tragic mass shooting at a Florida school.

“We have to take a hard look at mental health, which I have so much of,” he began. “I have one of the healthiest mentals. My mentals are so high,” he added.

Baldwin’s Trump then went back and forth on the debate saying that he loves the Second Amendment but that maybe we need to “take everyone’s guns away.”

“Don’t worry, Mike. I met with the NRA, they gave me 30 million good reasons not to change a thing,” Baldwin’s Trump said to the fake Pence.

He also took time to mourn the loss of Hope Hicks who announced her pending resignation last week.

Hicks, played by Cecily Strong, appeared later on Weekend Update to say goodbye to her friends from her “semester abroad at the White House.”

“Some people dance in our lives and quickly go. But they always leave footprints on our hearts, and fingerprints on Russian documents.”

You can watch Baldwin in action, below, followed by a brief clip of Hope Hicks being spoofed during the show’s Weekend Update segment.

Hope Hicks is saying goodbye after an amazing semester abroad at the White House. #SNL pic.twitter.com/pQBZnmtz9O