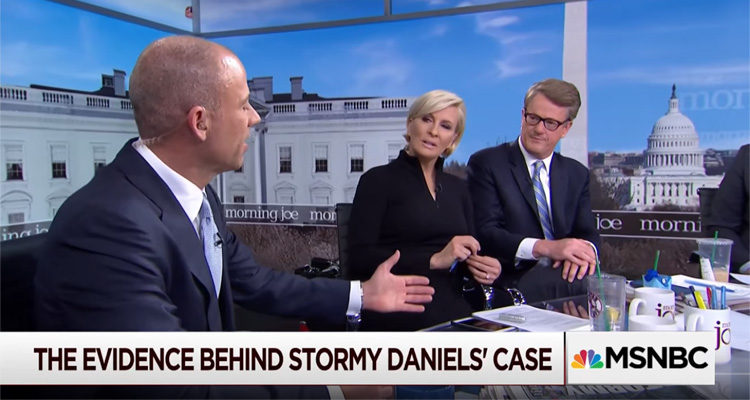 Stormy Daniels’ attorney Michael Avenatti appeared on MSNBC’s “Morning Joe” Tuesday morning where he discussed Michael Cohen’s Monday court hearing, why he says Daniels has been vindicated, why he says he believes Cohen will be charged in the next 90 days and who could be behind the threat against his client.

After a brief discussion about the recent revelation that Fox News host Sean Hannity was Cohen’s previously unnamed third client, the conversation turned to Cohen himself.

John Heilemann, the host of Showtime’s “The Circus,” asked Avenatti to elaborate on his claim that Cohen would eventually flip on Trump.

“I think this investigation has taken on an enormous amount of momentum, I think the amount of information that was obtained [in the raid on Cohen’s office] was significant,” Avenatti responded. “From what I’ve heard, from what I’ve seen, there is no question Michael Cohen is going to be charged. It is only a question of when, and I think it is going to happen in the next 90 days.”

Continuing, Avenatti stated that: “Based on my experience in white collar criminal investigations and prosecutions, the likelihood of him not rolling over is very, very slim. I can’t imagine he’s going to go to trial, potentially face 10, 20, 25 years in a federal penitentiary for anybody, let alone a guy, Donald Trump, who left him behind when he went to Washington D.C. Don’t forget that Michael Cohen was supposedly his right-hand fixer, etc., and when Donald Trump was finally elected he blew Michael Cohen off.”

Avenatti responded: “And how many times are you stiff-armed before you say – as they say in Italian – “basta” – “enough.” You think Michael Cohen’s wife is going to advise him to take a 20-year bullet for the president? I doubt it.”

Scarborough added: “What about his children? [MSNBC contributor] Donny Deutsch knows Michael Cohen and we know other people who know Michael Cohen. He loves his kids, he loves his family, and he loves his kids more than he loves Donald Trump. I understand loyalty, but it only goes so far when your own children are saying ‘dad, what’s going on?'”

“It’s Trump or watch your kids grow up. What are you going to pick when that question is put to you?” co-host Willie Geist replied.