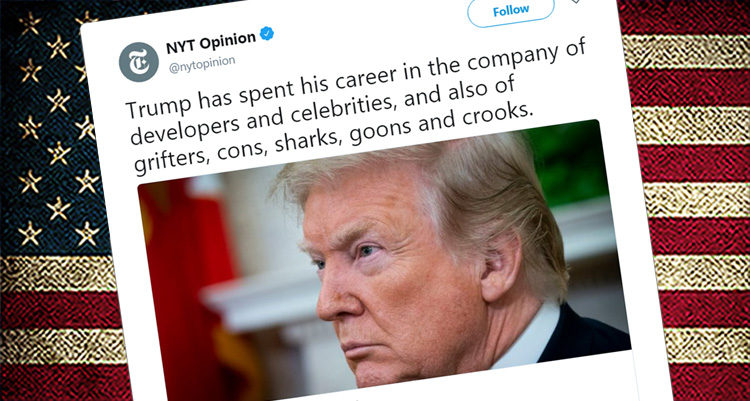 The New York Times didn’t hold back when they railed against Trump in a blistering op-ed bashing his narcissistic and self-pitying claim that the Department of Justice is picking on him.

The Editorial Board of The New York Times published a sternly worded article warning Trump that “The Law Is Coming.”

After detailing events surrounding and subsequent to the FBI raid on the New York office, home and hotel room of Trump’s personal lawyer Michael Cohen, the Editorial Board aptly summarized the current state of affairs:

Meanwhile, the president’s former campaign chairman is under indictment, and his former national security adviser has pleaded guilty to lying to investigators. His son-in-law and other associates are also under investigation.

This is your president, ladies and gentlemen. This is how Donald Trump does business, and these are the kinds of people he surrounds himself with.

Continuing, the Board offered the following powerful statement regarding Trump’s background and mode of operation:

Mr. Trump has spent his career in the company of developers and celebrities, and also of grifters, cons, sharks, goons and crooks. He cuts corners, he lies, he cheats, he brags about it, and for the most part, he’s gotten away with it, protected by threats of litigation, hush money and his own bravado.

However, as the editorial board continued: “Those methods may be proving to have their limits when they are applied from the Oval Office.”

As the board noted, there is real cause for Trump to be alarmed by recent events:

Though Republican leaders in Congress still keep a cowardly silence, Mr. Trump now has real reason to be afraid. A raid on a lawyer’s office doesn’t happen every day; it means that multiple government officials, and a federal judge, had reason to believe they’d find evidence of a crime there and that they didn’t trust the lawyer not to destroy that evidence.

Towards the end of the article, the Editorial Board offered the following brief overview of the events of Monday morning:

Continuing, they got to the heart of the matter:

Mr. Trump also railed against the authorities who, he said, “broke into” Mr. Cohen’s office. “Attorney-client privilege is dead!” the president tweeted early Tuesday morning, during what was presumably his executive time. He was wrong. The privilege is one of the most sacrosanct in the American legal system, but it does not protect communications in furtherance of a crime. Anyway, one might ask, if this is all a big witch hunt and Mr. Trump has nothing illegal or untoward to hide, why does he care about the privilege in the first place?

“The answer, of course, is that he has a lot to hide,” the Editorial Board concluded.

Time will tell what comes of Michael Cohen, Trump and the rest of his regime, but in the meantime – most credible news agencies are bracing for a bumpy road along the way with recent revelations that Trump attempted to fire Special Prosecutor Robert Mueller for a second time last December and is considering firing Deputy Attorney General Rob Rosenstein in the wake of the raid on Cohen’s office…