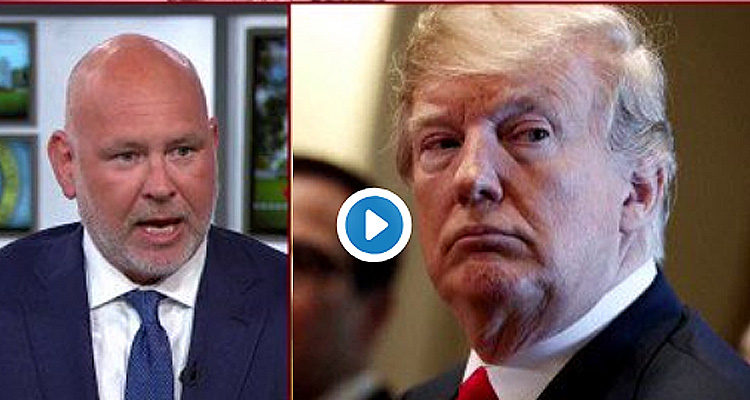 The Washington Post reported last week that “Republican strategist Steve Schmidt, a senior adviser to the presidential campaign of Sen. John McCain (Ariz.), announced early Wednesday that he is leaving the Republican Party, which he decried as ‘fully the party of Trump’ and ‘a danger to our democracy and values.'”

In early-morning tweets, Schmidt, a vocal Trump critic, urged voters to elect Democrats in the 2018 midterm elections and harshly criticized the administration’s policy of separating migrant children from their parents at the U.S. border, describing the government-run detention centers as “internment camps for babies.”

Normally, we would provide some background, but Schmidt’s words speak for themselves, and we don’t want to dilute his message, so we are just going to publish his remarks without elaboration.

Look there’s a couple of things going on here. One, he’s inciting through mass rallies and constant lying, fervor in a political base. He scapegoats minority populations, affixed blame to them for every problem the country faces.

He alleges conspiracies of nefarious forces. He creates a mass sense of victimization amongst his base and then he asserts extraordinary claims of power to protect the victims from the scapegoated population and the nefarious conspiracy that is fundamentally illiberal, deeply un-American and frankly could be straight out of Munich circa 1928.[1] It’s very alarming.

"He couldn’t be more ignorant. He's a supernova of ignorance ….He scapegoats minority populations & affixes blame to them for every problem the country faces …" @SteveSchmidtSES w/ @NicolleDWallace pic.twitter.com/IfYZADkGsz

Schmidt has been quite vocal in recent weeks, taking time to take on Trump in another noteworthy appearance on “Deadline: White House” last month when he discussed the Trump administration’s efforts to destroy the rule of law in America – a law that has held for 240-plus years until now.

Again, we are going to let his words speak for themselves.

This president is besieged by investigations, and all around this president from Scott Pruitt and cabinet secretaries who have already resigned – we see fantastic levels of corruption, the type of corruption we haven’t seen in this country going back a hundred years.

And what’s increasingly clear, whether the target is James Comey, whether it’s Director Mueller the Special Counsel, the reality is that this president will burn everything to the ground to protect himself from this investigation moving closer to the Oval Office.

Everything he’s doing is a strategy of incitement. He’s trying to harden & incite his base through the most deliberate, the intense misinformation campaign that this country has ever seen.

This president is a serial liar. He is lying to the American people every day. He is making up things out of whole cloth. He is serially attacking vital institutions that are necessary to the security of the country.

He will apparently stop at nothing.

There is a second scandal, and that is the complicity of the majority party – the Republicans in the Congress.

The fact is that there is not one of them, not one who will stand up and say that we are a country of laws, that no one person is above the law, that these institutions are vital and necessary and objective truth matters.

This is propaganda. This is what propaganda looks like. It’s what it smells like. We have never seen anything like it. What we’re seeing is an attack from within on vital institutions like a person’s body would be attacked by a flesh-eating bacteria, and it is unprecedented in America.

Host Nicolle Wallace followed up asking: “We started the hour with news that Emmet Flood, one of the president’s new lawyers representing him in the Russia probe, attended this meeting on Capital Hill with the Gang of Eight where they reviewed the most sensitive of information about a human informant. Can you imagine any scenario Alberto Gonzales [former Attorney General under George W. Bush] or Harriet Myers [former White House Counsel to George W. Bush] would have checked in with Pat Fitzgerald who was investigating the outing of CIA agent Valerie Plame?”

We’re moving as John Heilemann said “closer and closer to crisis to the critical hour.” And the rule of law in this country must be defended.

There’s a potential, absent any defense of it by leaders in this country, that we’ll be living in a very different type of country. For 240-plus years the rule of law has held in the United States of America; and the spinning of these conspiracy theories, the constancy of the attacks, the victimization that Trump puts upon himself – always blaming someone, this nefarious conspiracy – this is the hallmark of autocratic leadership back to the beginning of time. This is not normal in a democratic republic like the United States. And it should be opposed.

Footnote 1: A reference to efforts by the recently reformed Nazi Party to contest the results of the 1928 German federal elections although they received less than 3% of the vote, winning just 12 seats in the Reichstag [Germany’s lower house of congress at the time].