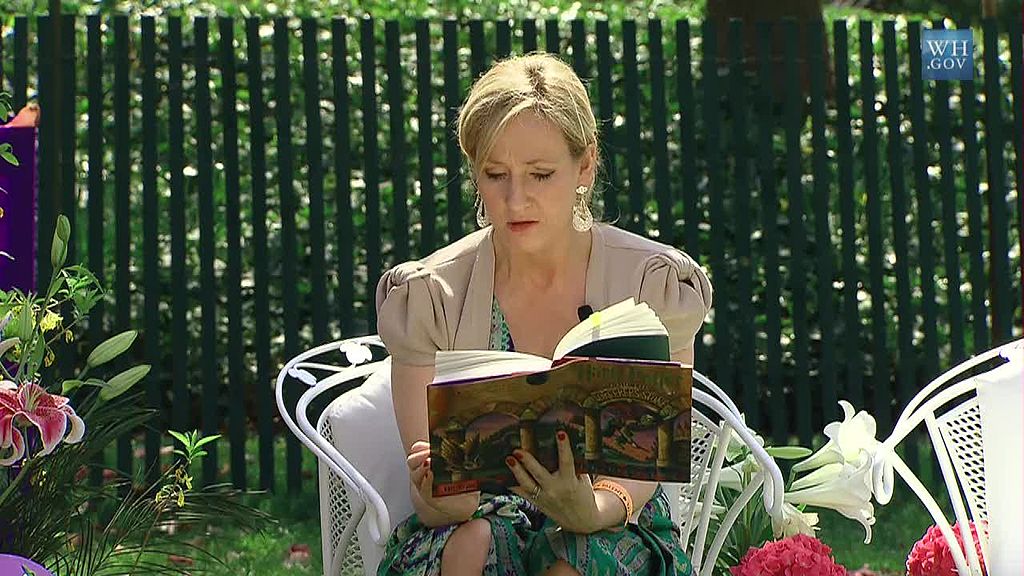 With one perfect tweet, J.K. Rowling puts Trump in his place after he tosses another one of his infamous Twitter-tantrums.

British novelist, screenwriter and film producer J.K. Rowling is best known as the author of the Harry Potter fantasy series, and when it comes to “calling bullshit” on politicians – she isn’t the least bit shy.

Suffering an apparent panic attack, Trump blurted out six tweets this morning lashing out at all your favorites from “Rigged and Disgusting Witch Hunt” to “Crooked Hillary,” and “McCarthyism at its WORST!” to “Fake News” and many others.

Rowling targeted one of those six tweets in particular: “Some members of the media are very Angry at the Fake Story in the New York Times. They actually called to complain and apologize – a big step forward. From the day I announced, the Times has been Fake News, and with their disgusting new Board Member, it will only get worse!” Trump tweeted.

“I do’nt care what Kids at School call me because they are all Disgusting Fake Losers and my Real Friends go to a diffrent Scool you haven’t heard of and they think Im the Coolest and Smartest and we go to parties and I don’t have to tell you there Names for this to be True,” she tweeted.

I do'nt care what Kids at School call me because they are all Disgusting Fake Losers and my Real Friends go to a diffrent Scool you haven't heard of and they think Im the Coolest and Smartest and we go to parties and I don't have to tell you there Names for this to be True. pic.twitter.com/vTXm13DShu

Trump is a frequent target of Rowling; and, although she does not weigh in as frequently as other outspoken critics of Trump, her tweets are some of our favorites.

As Richard Zombeck reported a couple of years ago, “Writers are the last people you want as an enemy. As Mark Twain was famous for saying, ‘Never pick a fight with people who buy ink by the barrel and paper by the ton.’ In fact, as obvious as it may seem, writers have a way of getting you right where it hurts. They are frustrated, snarky, and incredibly descriptive.”

In October 2016, she posted a tweet, pretending to be Donald Trump – mocking him for his ridiculous claim that it was Democratic rival Hillary Clinton‘s fault that he has not been paying any federal taxes and for his 2005 p*ssy-grabbing remarks captured on video in the now infamous Access Hollywood bus tape.

“‘It’s your fault I didn’t pay taxes, Hillary. Women let you do anything when you’re a star,’” she wrote.

Later that month, she swiftly and brutally cut Trump down to size with a viral tweet that has received over 62K “likes” and has been retweeted nearly 24K times.

“When a man this ignorant & easy to manipulate gets within sniffing distance of the nuclear codes, it’s everyone’s business.” she tweeted.

Rowling and horror writer Stephen King have teamed up on numerous occasions to troll Trump, leading to one of our favorite Twitter takedowns of 2017.

Earlier this year, she joined BBC News to tag-team Trump, mocking him with photos of the royal wedding between Meghan Markle and British Prince Harry.

BBC Three, which targets millennial viewers, first tweeted the pair of photographs. One showed a sparse crowd at the 2017 inauguration and another, far more crowded, aerial photograph of Saturday’s wedding between Prince Harry and Meghan Markle.

“Just saying,” the tweet from the BBC simply stated.

We are eager to see what the coming weeks and months bring from Rowling’s always interesting and frequently amusing Twitter feed.