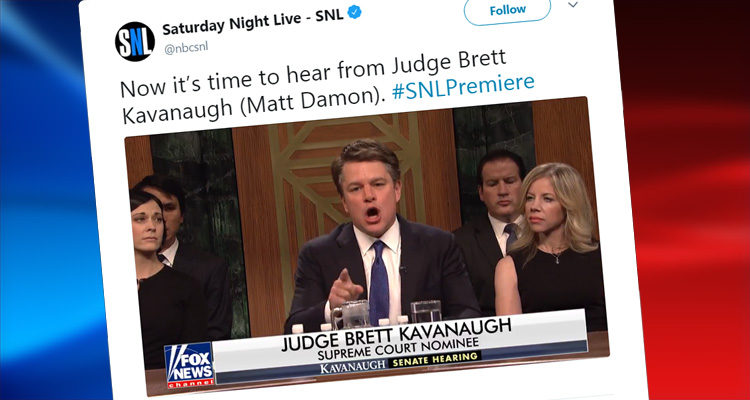 Damon’s fiery Brett Kavanaugh was grilled during SNL’s cold open and was joined by Kate McKinnon’s Sen. Lindsey Graham screaming “I will not shut up because this is a bunch of C-R-A-P, crap,” and other noteworthy characters.

If you thought Saturday Night Live was going to delve into politics for its season opener – you would be correct.

That hearing, as The Washington Post reminded readers, “centered on an allegation of sexual misconduct made against the judge by California professor Christine Blasey Ford, Damon’s Kavanaugh responded at full volume.”

“Let me tell you this,” a fired up Matt Damon shouted. “I’m going to start at an 11. I’m going to take it to about a 15 real quick. First of all, I showed this speech to almost no one – not my family, not my friends, not even P.J., Tobin or Squi. This is my speech.”

Continuing, Damon’s Kavanaugh characterized the multiple allegations lodged against him a “political con job, orchestrated by the Clintons and George Soros and Kathy Griffin and Mr. Ronan Sinatra.” (As The Washington Post explained, the Sinatra remark was referring to the theory that Frank Sinatra is Ronan Farrow’s actual father.”)

The hearing was joined by several other characters to include former cast member Rachel Dratch who returned to portray Sen. Amy Klobuchar (D-MN) who asked Damon if he believed he was a “frequent drinker” in high school.

Cecily Strong’s Feinstein asked Damon’s Kavanaugh if he thought he had the proper temperament to serve as a Supreme Court justice.

A fired up Damon, yelled: “I WENT TO YALE. Worked my butt off to be here. I busted my buns.

“I WENT TO YALE,” he yelled. “Worked my butt off to be here. I busted my buns. I lifted weights.”

“Every day Tobin, P.J., Squi and Donkey Dong Doug,” Damon continued, beginning to sob. “And yeah, we had a couple thousand beers along the way, especially my good friend Mark Judge who can’t remember huge chunks of his life but is somehow my key witness.”

Concluded, Damon shouted: “Am I angry? You’re damn right. But if you think I’m angry now, just wait until I get on that Supreme Court because then you’re all going to pay.” He then asked for a can of water and shot-gunned it.