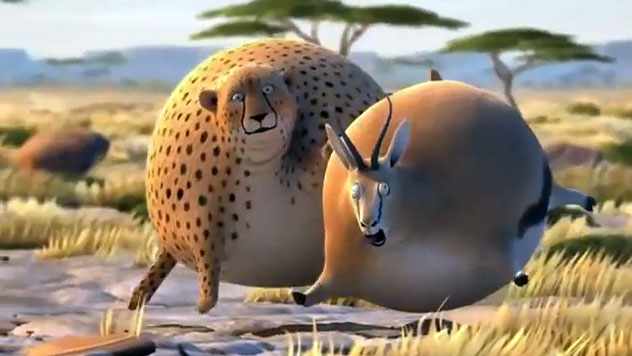 What would happen if animals ate at McDonalds?

You ever wonder what would happen if animals ate junk food? While that is not exactly what the creative minds behind Rollin’ Wild had in mind, the analogy seems apt once you watch one of their outstanding animations.

As CG Society, a global organization for digital artists explains, “Rollin’ Safari was a student project, produced as part of the Subject Area Animation at the Institute of Animation, Visual Effects and Digital Postproduction. The production concept was started by Kyra Buschor and Constantin Paeplow, who collectively came up in October 2011 with the idea of the bloated animals.”

According to non-profit adverting organization D&AD, Buschor and Paeplow are “a young directing duo hailing from Switzerland and Germany respectively,” who were students at Filmakademie Baden-Wuerttemberg, a film school in Germany at the time.

“If all animals became round overnight, would their daily life still run that smoothly?”

This was the question Buschor and Paeplow were dealing with when they first began developing the concept for Rollin’ Wild.

Speaking to D&AD, Buschor and Paeplow explained that they “took inspiration from wildlife documentaries. We wanted the viewer to feel they were observing well-known scenes so the look of the films had to be quite natural, but we didn’t want to make it photo-real as the animals would look a bit creepy. We went for a slightly stylized look with a colour palette that’s very close to the real world.”

CG Society talked to producer Philipp Wolf, who related: “Our initial idea was to tell a high-speed chase, but just a little different to known scenarios. Imagine the story of a hunter pursuing a fat, rolling deer in the forest. We thought that would be hilarious.”

“We loved the idea of rollin’ animals so much, we decided the hunter should be an animal as well! That’s even more hilarious! It would also take place in the Savannah because it gives a bigger choice of typical wildlife hunting scenes.”

You can watch one of their amazing animations below, from the Rollin’ Wild Facebook page, and you can go to the official Rollin’ Wild YouTube page to view additional clips.