February 29, 2016 by Kimberley Johnson No Comments 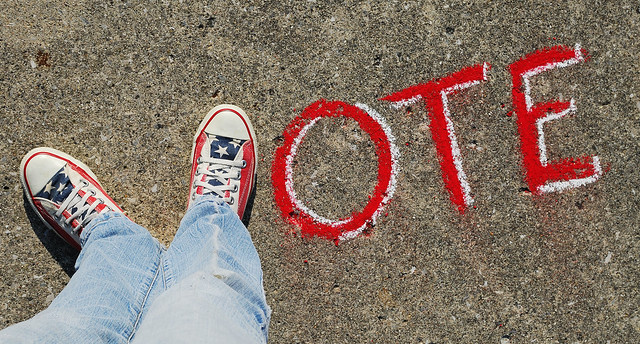 It’s time to make voting mandatory. It won’t be difficult. Here’s how we do it.

The idea of mandated voting really pisses some folks off. For some reason, a number of people argue the idea that we should all be responsible and politically engaged is un-American. Some who complain about low voter turnout  compare mandatory voting to a dictatorship. Please allow me to explain why that’s a bunch of horseshit and how it could work.

We all live in this country, and we owe it to each other as a national community to do what’s best for everyone. There are rules in place in schools, the workplace and most other organized groups. If voting were mandated, each and every ballot could supply write-in options for every elective office from the president on down. That takes care of free speech.

Right now, if you are called to jury duty, you have to go. Period. If you want to drive a car, the law requires you must pass a test in order to get a driver’s license. Furthermore, if you purchase a vehicle, you must register that vehicle and pay a license fee. Get caught driving without a registration or a license, you must pay a fine. You have to pay taxes. If you don’t pay your taxes, you are fined. I’m guessing you don’t feel these rules are akin to a dictatorship. (Maybe some people do.)

It would be quite easy to enforce mandated voting. There is already a database of those who have voted. It would simply be a matter of electronically cross-referencing voter rolls with tax rolls. Don’t vote – pay a fine. For fun, let’s say $20 – that is the fine Australia levies on its citizens who do not vote. That money could be used for the good of American communities. It could, and should be, tightly regulated and be used for the funding of infrastructure, health care, education, or something that will benefit all.

Those who wish not to vote – but insist on complaining about what the elected officials do − would be contributing rather than just complaining. Some will surely argue that $20 is a lot of money for people who have low incomes. So the answer would be to vote. Voila! No fine. Click the link to read more about how compulsory voting works in Australia HERE. Do you think Australia is a dictatorship? If your answer is yes, perhaps you need a dictionary and a reality check.

For those who complain about having to vote the lesser of two evils, consider this: You may not like your choices, but someone WILL be elected. People have fought and died so you could have a say. Take it. Realize that it is incremental. One thing leads to another. If enough people take responsibility and participate, we might actually not have to choose between two crappy candidates. Crappy selections are our fault and are a direct result of people not voting. And if you simply cannot bring yourself to vote for anyone, pay the $20.

Additionally, for those who argue that the system is corrupt – you are correct. It is corrupt. Has there ever been a government in the history of the world that has not been corrupt in some way? AND whose fault is it? Considering that We The People are the majority, and we are the ones who elect political representatives, it stands to reason that if enough of us demand change, we shall see change. How does walking away from or ignoring corruption solve anything? EVER? When you see a leak in your roof, do you just turn away and pretend it isn’t there?

In addition to mandating voting, the other campaign reform we need is federalized elections. Bob Cesca made the case for federalizing elections in this great Salon piece.

People may vote in order to avoid the fine but remain uneducated about the politicians and their policies. This happens anyway. Granted, there may be more uneducated people who vote, but it also might make more people choose to actually understand what’s really on the table and hold politicians accountable. Imagine that! For those who choose not to vote, at least they’ll be contributing $20 to the national effort instead of only whining about what a terrible system we have.

Elected officials are civil servants, and they are paid with our tax dollars. We provide them with healthy pensions. We give them power to create laws that we all must live by. We should all have a say in who is elected. They SERVE us. We EMPLOY them.

The argument against voting is whiny, irresponsible and rife with privilege. As a voter you will not always get your way. This is life. You cast your vote and realize that change happens over time, and sometimes, the change you wish to see is halted or may not take place. Deciding that voting is not worth it because you don’t get your way every single time is tantamount to stomping your angry feet and throwing a hissy fit because it’s not all about you. What do you think the Founding Fathers have to say about that?