September 21, 2018 by Kimberley Johnson No Comments 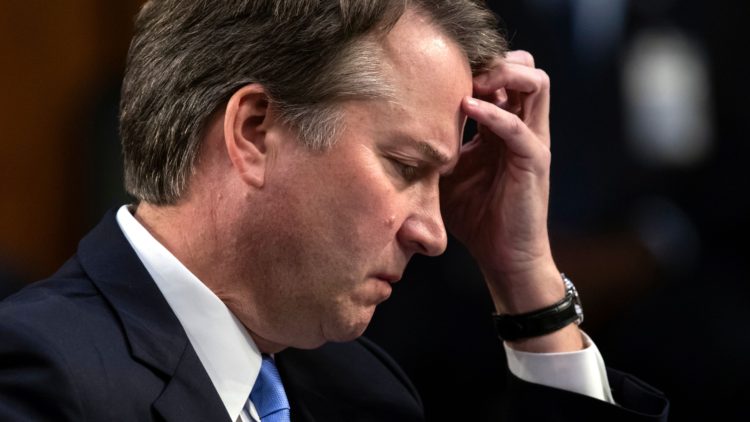 On Thursday evening, conservative commentator and advisor of Brett Kavanaugh, Ed Whelan, tweeted out a far-fetched thread theorizing that Dr. Christine Blasey Ford was indeed sexually assaulted when she was a teen, but that she had mistaken another Georgetown Prep student for Kavanaugh.

Whelan’s thread began with, “By one week from today, I expect that Judge Kavanaugh will have been clearly vindicated on this matter,” Whelan said in a tweet on Tuesday. “Specifically, I expect that compelling evidence will show his categorical denial to be truthful. There will be no cloud over him.”

In a subsequent tweet, Whelan said, “Senator Feinstein will soon be apologizing to Judge Kavanaugh.”

His conspiratorial thread named a private citizen he claimed was the real attacker and he went so far as to include maps, floorplans and yearbook photos. Even worse, Whelan tweeted the name, former address, and Facebook posts of the man he claimed assaulted Dr. Blasey.

Soon after he made the wild accusation, Whelan, a former clerk to Justice Scalia and head of the right-wing Ethics and Public Policy Center, came under fire from both conservatives and liberals for defaming a private citizen.

In a statement to the Washington Post, Dr Ford dismissed Whelan’s theory, saying, “I knew them both, and socialized with” the other classmate, Ford said, adding that she had once visited him in the hospital. “There is zero chance that I would confuse them.”

Whelan has been involved in helping to advise Kavanaugh’s confirmation effort and is close friends with both Kavanaugh and Leonard Leo, the head of the Federalist Society who has been helping to spearhead the nomination. Kavanaugh and Whelan also worked together in the Bush administration.

Kavanaugh and his allies have been privately discussing a defense that would not question whether an incident involving Ford happened, but instead would raise doubts that the attacker was Kavanaugh, according to a person familiar with the discussions.

Another Twitter user replied to Marshall saying the communications director for Sen. Orrin Hatch (R-TN) was aware the Whelan accusations were about to break, but then he later deleted the tweet:

Orrin Hatch's communications director knew about it. He deleted the tweet. pic.twitter.com/HebXOghuKJ

On September 18, days before Whelan’s tweetstorm, he tweeted an article titled: Kavanaugh tells Hatch accusation may be mistaken identity

After fierce criticism from the left and the right, Whelan issued an apology on Twitter:

I made an appalling and inexcusable mistake of judgment in posting the tweet thread in a way that identified Kavanaugh’s Georgetown Prep classmate. I take full responsibility for that mistake, and I deeply apologize for it. I realize that does not undo the mistake.

Yes, fine, that's great. But did Brett Kavanaugh work on this effort, or approve it? Did he know you were going to do this? This isn't about you, it's about him and his judgment. https://t.co/XpIFB9jKaD

If Kavanaugh knew in advance, or was involved in Whelan’s defaming a former classmate as a way for the Supreme Court nominee to wiggle out of a rape allegation, his nomination should be withdrawn and he should be impeached from the federal judiciary.