" /> Brokered Convention? How About A Palin/Nugent Ticket? 100s Of Conservatives Agree!

Brokered Convention? How About A Palin/Nugent Ticket? 100s Of Conservatives Agree!

March 18, 2016 by Kimberley Johnson No Comments 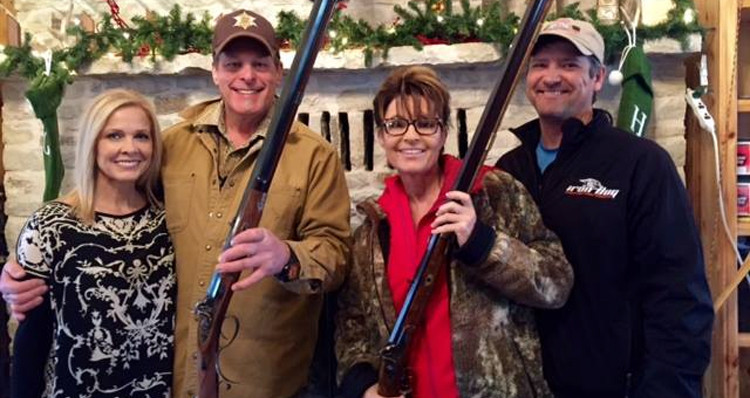 Got a brokered convention? No problem – 100s of conservatives have already spoken out giving their support to Palin/Nugent 2016.

With the possibility of a brokered convention looming on the horizon for Republicans, it’s time to start considering who to put up.

It just so happens that we have just the team – and one that has already been suggested by literally 100s of conservatives.

About a year-and-a-half ago, controversial rocker and conservative hero Ted Nugent posted a picture of himself and his wife, Shemane standing with Sarah and Todd Palin on his Facebook page. The caption read: “Had a wonderful day with Sarah & Todd Palin at our home on SpiritWild Ranch in TX today. Great Americans, great people, great patriots & great warriors on the side of good in this vile culture war against the America haters & subfleebs on the mongrel left.”

Within 1/2 an hour of posting, at least 300 people commented and many were pleading for a Nugent/Palin 2016 ticket. There were all kinds of comments from fans and here is a sampling from some who weren’t asking them to run.

And we must concede – we love the idea of a Palin/Nugent ticket for 2016. Can you say “President Hillary?” or “President Bernie”?

Jeff: She [Palin] has nice boobs.

John: shoulda invited the obamas too, as targets !

Mark: Libs who voted for Obama and Biden actually have the audacity to question the intelligence of Sarah Palin? I’ve heard it all now. If you want to see a moron, look in the goddamn mirror leftists!

Mike: Ted Nugent and Sarah Palin with guns in the same picture. I can almost hear liberals’ heads exploding.

Ben: Wow. I am surprised at how many libtards there are out there that think they can discredit someone by just calling them “dumb” or a “crackpot”. How about throwing some issues out that you disagree with, maybe throw in some actual facts to back it up! If you don’t love freedom loving Americans like these people then move to Afghanistan or something. They will be glad to take away your freedom and liberty. Especially if you are a woman. More space for us Americans that ARE proud of this country and how it was founded, and hate the way liberals (or progressives or what ever oxymoronic unicorn land name you want to give yourselves) are systematically ruining this the greatest nation on earth. Ted Nugent and Sarah Palin are true Americans that love this country. So if you want to come at them with ignorant schoolyard insults you are just making yourselves look stupid. So keep it up. I enjoy showing everyone how dumb you really are. DRILL BABY DRILL! HUNT BABY HUNT! I LOVE THIS COUNTRY!

Check out the post and let us know your thoughts in the comments, below.