" /> Why We Need To Pass The Equal Rights Amendment

March 28, 2016 by Kimberley Johnson No Comments 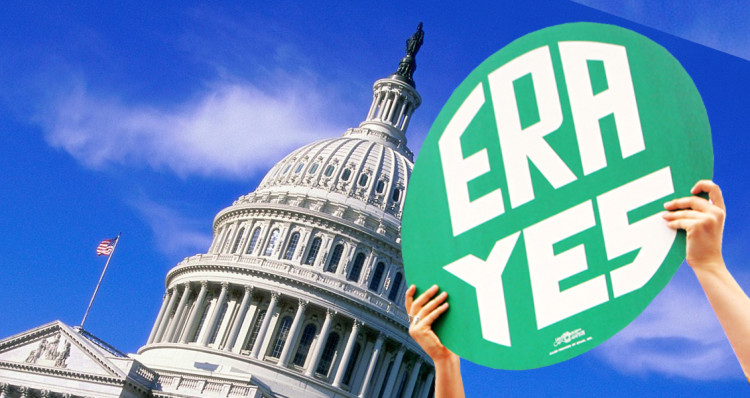 In today’s political climate, passage of the Equal Rights Amendment is more important than ever.

Many people have asked me for some bullet points on why we need the Equal Rights Amendment, so I am putting together information for those who wish to share, educate or simply have some talking points when the importance of the amendment is questioned.

Here is the text of the Equal Rights Amendment:

Section 1. Equality of rights under the law shall not be denied or abridged by the United States or by any State on account of sex.

Section 2. The Congress shall have the power to enforce, by appropriate legislation, the provisions of this article.

Section 3. This amendment shall take effect two years after the date of ratification.

Women are not a protected class. Some examples of how the ERA will benefit women:

If a woman finds her male counterpart is earning more money for the same job and she sues the company they work for, this can be cited by a lawyer and will force the company to give a reason as to why she is making less. If they cannot prove any reason other than gender, the law and the Constitution protect her.

If a woman is raped and during the trial, she is painted to be at fault because she was drinking alcohol or wearing a short skirt, again, a lawyer can cite the amendment and show that she is being discriminated against based on gender. Men are not usually blamed for being victims of a crime because of what they were wearing or if they were intoxicated when the crime occurred.

Gender rating exists when insurance companies determine what to charge a customer and women have historically been charged more than men. The amendment would be a source to protect women from having to pay higher premiums based on gender. It should be noted this has been addressed in the Affordable Care Act and in 2014, it will be illegal to charge higher premiums based on gender. However, laws are subject to change, so to insure equal treatment a constitutional amendment is necessary to protect women’s rights for all time.

Women In The Military:

Women are now able to fight as men do in wars. They put their lives on the line and though it’s not a pleasant truth, the military is known for gender discrimination and turning the other way when women report they’ve been raped. One argument against ratifying the ERA used by ant-feminist Phyllis Schlafly in the 1970s was that women could be drafted. The recent decision to let women fight on the front lines means that women can be drafted, so don’t you think they should treated the same as their male counterparts for their willingness to defend the United States?

Arguments Against the ERA:

The arguments used to prevent the ERA from being ratified were nothing more than empty scare tactics. Schlafly argued that there would be unisex bathrooms and that feminists demanded “gender neutrality.” This is so stupid, it doesn’t merit a retort but I will say this: As long as men have penises and women have vaginas, we are not in danger of having a gender-neutral country.

Another tactic to make people believe we don’t need equal rights for women is the argument that 14th Amendment is sufficient. The amendment claims to protect all persons but if that were so, why was black suffrage the 15th Amendment and women’s suffrage the 19th? Because clearly, the 14th is not enough protection. The key here is how it can be used when protecting the rights of women, and particularly in lawsuits. When a constitutional amendment is cited in a court of law, it carries legal merit.

The National Organization for Women has a more detailed list of why the ERA needs to pass. You can see the list HERE.

Not enough people understand that the ERA was never ratified into the Constitution or why it’s so important. We can change that by talking about it and educating young women. This is not a partisan issue. Women who belong to any political party will benefit. The proof is women’s suffrage. Women made sure in the 1920s that the right to vote was secured in the Constitution.

When the Equal Rights Amendment passes, it will not automatically mean everything will be perfect. It will mean that we have what we need and deserve to fight against injustices based on gender.

There are several petitions circulating to get the Equal Rights Amendment passed. Here are a couple we recommend: