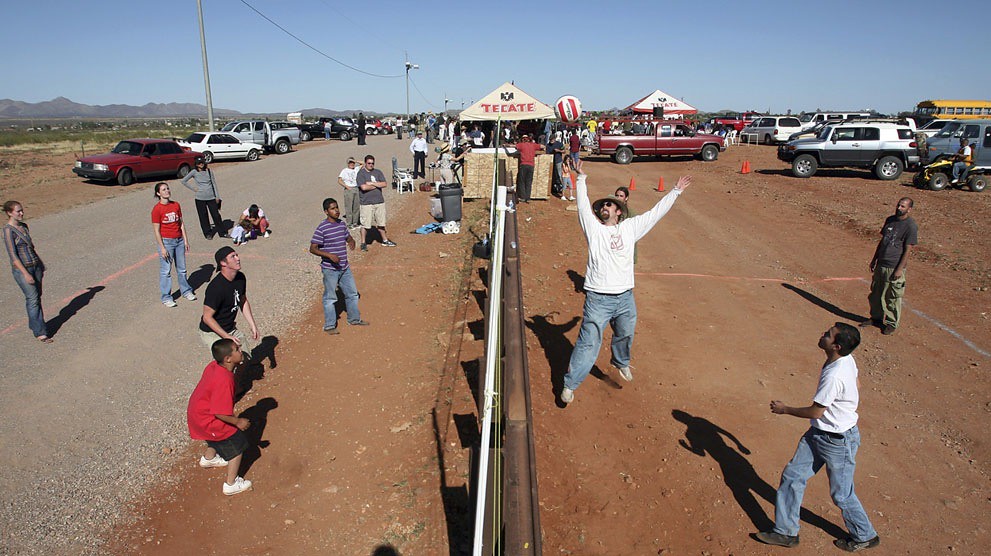 This cross-border volleyball game has endured for nearly 40 years – and counting!

As Quartz reports, “The frontier between the United States and Mexico is the busiest land border in the world. It is also among one of the world’s most heavily regulated and policed border zones—the arid climate of which is responsible for many migrant deaths each year.”

With an approximate 350 million crossings annually, the U.S.-Mexico border is the most legally-crossed border in the world, and also one of the busiest gateways for illegal migration. Now add the violence and rampant corruption in Mexico, and the border becomes an easy scapegoat for U.S. politicians looking to score points with voters, many whom have never been to Mexico or even a border state.

The cross-border walleyball game – a party, which also features picnic tables and food stands set up along the fence – puts a human face on the often empty and vague speeches politicians utter.

In a 2007 article, the mayor of the Mexican side of Naco, Jose Lorenzo Villegas, told Reuters that “For us, it represents the celebration of the union of two countries.”

“What’s unusual is that both the Mexican and U.S. teams are playing at home, with the fence as the net,” he added.

Rafa Fernandez De Castro of Fusion writes that “The game, which has become an annual April tradition… is the newest way border town residents are celebrating bi-national ties and defying political boundaries by using the fence as a playground for creatively subversive sports.”

For instance, “In January 2010, a collective of artists and activists held a soccer match that took place at the Mexicali-Calexico border fence with the teams dressed in jerseys depicting the faces of U.S. and Mexican presidents,” De Castro writes.

“Along the Tijuana-San Diego fence, US and Mexican musicians perform the annual ‘Fandango Fronterizo,’ which is a sort of contagious singing and dancing showdown between the local border communities.”

The border between the US and Mexico is often shadowed by prejudice and morbid media coverage. But “wallyball” is a testament to the great, untapped potential of cooperation on both sides of the fence. Both teams may be playing on their respective “home turf,” but the game is clearly less about where you’re from, and more about than the fun to be had when differences are set aside.