June 5, 2017 by Kimberley Johnson No Comments 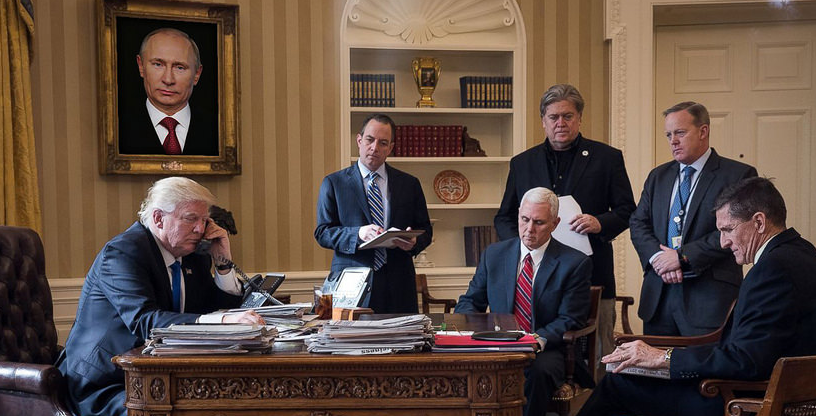 This is a photoshopped picture, and it was chosen on purpose.

The Director of the National Security Agency (NSA) Mike Rogers is scheduled to testify in front of the Senate Intelligence Committee Wednesday, and the Trump/Russia scandal is about to move to the next level.

According to former NSA Analyst and counterintelligence officer John Schindler, who broke the story in the New York Observer on May 26, Rogers has proof Trump colluded with Russians to sway the 2016 election.

Additionally, Atlantic magazine writer Steve Clemons told MSNBC’s Ari Melber on Saturday that Rogers “may have a bomb to drop” on the Trump administration when he testifies later this week.

Schindler reported that Rogers spoke at a town hall last month which was broadcast to agency facilities worldwide – but not made public.

“In his town hall talk, Rogers reportedly admitted that President Trump asked him to discredit the FBI and James Comey, which the admiral flatly refused to do. As Rogers explained, he informed the commander in chief, ‘I know you won’t like it, but I have to tell what I have seen’—a probable reference to specific intelligence establishing collusion between the Kremlin and Team Trump.

Rogers then added that such SIGINT exists, and it is damning. He stated, ‘There is no question that we [meaning NSA] have evidence of election involvement and questionable contacts with the Russians.’ Although Rogers did not cite the specific intelligence he was referring to, agency officials with direct knowledge have informed me that DIRNSA was obviously referring to a series of SIGINT reports from 2016 based on intercepts of communications between known Russian intelligence officials and key members of Trump’s campaign, in which they discussed methods of damaging Hillary Clinton.”

Clemons appeared on MSNBC’s “The Point with Ari Melber,” along with David Corn of Mother Jones.

“We now know for certain that Vladimir Putin waged political warfare against America’s democracy with the election last year,” Corn said. “Donald Trump is saying, ‘No, it’s not happening.’ It’s like a guy in front of a bank robbery saying, ‘Nothing is going on here.’ He [Trump] was helping.'”

“He made it easier for Putin to pull this off,” Corn asserted.

Clemons added, “While a lot of people have focused on James Comey — and that’s obviously a huge anchor in this — watch the Senate Intelligence Committee hearings on Wednesday. National Security Agency Director Mike Rogers may have a bomb to drop in this, as well as Dan Coates. I have been tipped off that Mike Rogers has a story to tell as well that goes right along the lines that our friend David Corn has shared.”