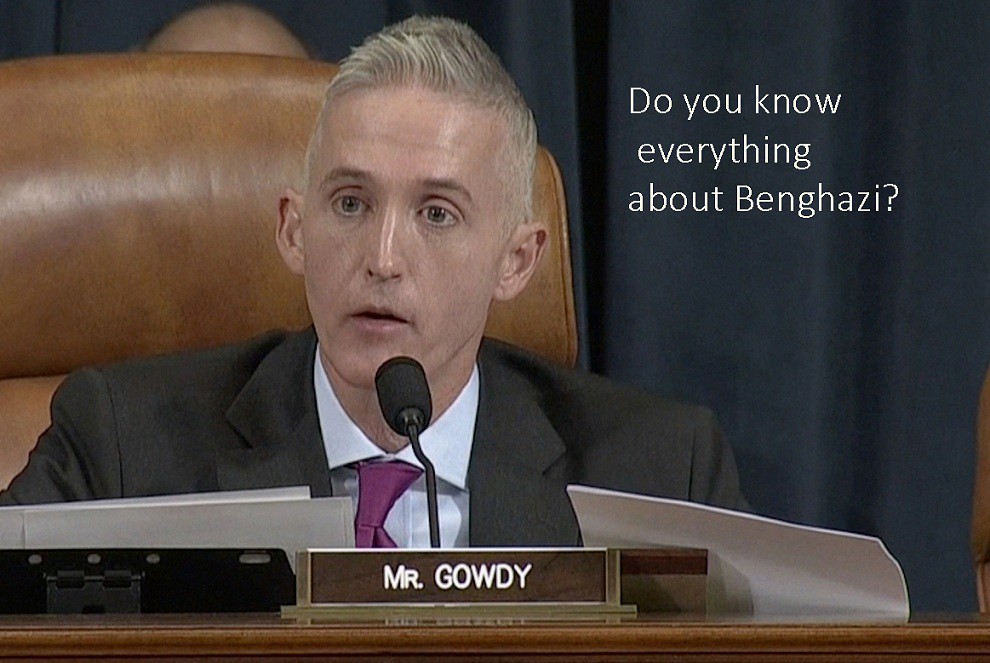 There were no holds barred when Rep. Trey Gowdy (R-SC) and his fellow Republicans were going after former Secretary of State Hillary Clinton over Benghazi. Trey Gowdy and many of those same Republicans are now trying to obstruct or shut down the Russia investigation.

Business Insider reported this week that: “Deputy Attorney General Rod Rosenstein and FBI Director Christopher Wray testified Thursday before the House Judiciary Committee about an inspector general report on the FBI’s handling of its investigation into Hillary Clinton’s use of a private email server when she was secretary of state.”

The inspector general report concluded that “senior FBI officials… broke Department of Justice protocol and made serious errors in judgment, how Inspector General Michael Horowitz found no evidence of bias in the decision by the FBI not to recommend charges against Clinton after their lengthy investigation.”

Nevertheless, as Business Insider added: “the report did not focus on the Russia investigation. However, Republicans have seized on its findings to question the legitimacy of the Russia probe and to demand additional sensitive documents about the investigation from the DOJ.

During Thursday’s hearing, Trey Gowdy lectured Deputy AG Rosenstein and Director Wray, telling them to hurry up and conclude the Russia investigation during a hearing on Friday June 29, 2018 stating:

And here’s where Gowdy’s mind-numbing hypocrisy comes into play.

But the hypocrisy doesn’t begin or end there.

It was later revealed that Gowdy used public funds to make that lawsuit go away. On Friday 01 December 2017, The Washington Post reported that “Gowdy used $150,000 in taxpayer dollars to settle” that lawsuit.