April 21, 2016 by Kimberley Johnson No Comments 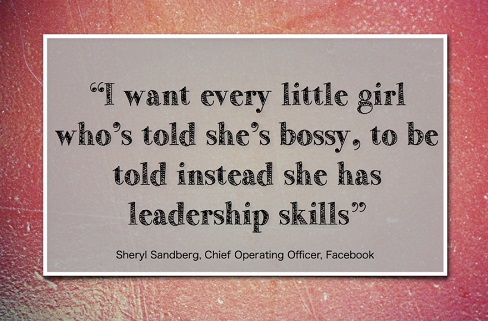 The word shouldn’t be the issue – the misogynistic attitudes behind the word compose the real crisis.

The United States doesn’t have a constitutional amendment guaranteeing protection against gender discrimination. The Equal Rights Amendment would remedy this embarrassing fact, and a ratified ERA would help to undo some of the more pervasive and negative stereotypes between the sexes.

In 2014, Facebook Chief Operating Officer Sheryl Sandberg and Beyoncé told us we can no longer refer to little girls as “bossy.”

Sandberg launched the Ban Bossy campaign to ban the word, and pop star, Beyoncé, as well as many other celebrities, joined in the fight. Their mission is noble. But can we really ban a word? And will banning the term really solve the problem of a patriarchal society? Is it a realistic goal?

My short answer is no. Before you tell me I don’t understand their goal, please read this in its entirety.

As a feminist, I believe in equality for all. I realize words have weight. I get that what we tell young girls has an enormous and lasting impact on how they view themselves. I was a young girl and I have lived this. Too many women don’t enter into politics because they know the horrible names they will be called and how they will be treated. There is a double standard for women and it does need to be addressed.

At the risk of progressives yelling at me and telling me I am not feminist enough or liberal enough, I will say that suggesting that we ban the word “bossy” when it pertains to girls is a misdirection. The word shouldn’t be the issue – the misogynistic attitudes behind the word compose the real crisis.

Shortly after the Ban Bossy campaign launched, I visited my friend who has two young daughters. One of her daughters is bossy. I called her bossy when she was shouting orders at her playmate. Then I thought of Beyoncé and her crusade against the word. I second-guessed what I’d said and worried that I damaged my little bossy friend for life.

However, as I really thought about it, I realized something: She is an alpha child and she was barking commands at her little friend. I can easily identify with this because I was a bit of an alpha child, and I was bossy on occasion. It wasn’t that I was just strong in my convictions; I bossed other kids around if I knew I could get away with it. I told them what to do when we were playing. That isn’t leadership. Leadership is when someone makes influential suggestions. Leadership is when someone guides and allows for open debate. Being bossy is all about making demands on others and not expecting an argument. If I saw a boy barking commands at his friend, I would still use the word “bossy” to describe his behavior. I wouldn’t say the boy is showing leadership skills or taking charge, I would say, “He is being bossy.”

Simply put, the term bossy is not gender specific. It can also be applied to boys. And, admittedly, boys are not told they’re bossy as often as girls.

When I was a kid and adults scolded me for bossing another kid around, it didn’t make me feel as if I had no power. It made me realize I wasn’t being fair, and it forced me to reevaluate and change my behavior.

Instead of banning a word, which will never happen, we need to put a greater emphasis on educating our youth about strong women in history. Yes, we need to watch our language, and we need to stop holding girls and boys to different standards. But that won’t happen by banning a word. Another one will pop up in its place. It will happen when children learn at an early age that both genders are capable of leadership.

One way we can better prepare our little girls to be strong women is to demand that women’s history and feminism are included in school curriculums. Some schools do touch on the subject, but I didn’t have the good fortune to attend one of those schools. In fact, I went to two junior high schools and two high schools. I never learned about Alice Paul or suffragists. I didn’t learn about Hedy Lamarr or Elizabeth Cady Stanton or Harriett Tubman in school. I’ve learned about these women because of Facebook and social media. If the names of those women were mentioned in my studies, it was no more than an unmemorable paragraph in a history book, and I have no recollection of learning about any of them. None of my teachers took it upon themselves to teach women’s history or even have a meaningful discussion in class. I do recall some of the male leaders I learned about, but not female leaders. That is shameful. (I imagine there are some of you who learned about historical women leaders, but please do not assume your experience is everyone else’s experience.)

Sometimes liberals are so busy being offended by words, they will overlook more effective methods to ensure the equality we are so adamantly fighting for. If we really want to teach our girls to feel they are important and have the potential to be leaders, then educate children about the historical accomplishments made by female leaders – leaders who were victorious despite the poor odds of succeeding in a patriarchal society.

Sometimes little girls show leadership skills, and when they do, they should be encouraged and praised. Is it really so horrible to point out to a little girl that she is being bossy when she is being bossy and encourage her to take a more productive approach? When you were a kid, were you ever bossed around by another kid? If so, how did you feel? Was it pleasant? Compare that to when a kid you knew displayed actual leadership skills. Did that make you feel as if you were being bossed around?

Leader is defined as:
1. a person or thing that leads.

Bossy: “Get off the couch, go into the kitchen and get me my crayon and paper now. Just do it now.”

Leader: “I have an idea. We could create a collage together. We need some crayons and some paper. Does that sound fun?”

Pretending there’s no difference between being bossy and being a leader is not responsible and by not noting the difference, we are doing young girls and boys a disservice.

Being responsible is tackling the bigger issue of how we educate our youth. When that is accomplished, we will see less misogyny. Nitpicky focus on specific and relatively harmless words distracts from the greater problem.