November 13, 2017 by Kimberley Johnson No Comments 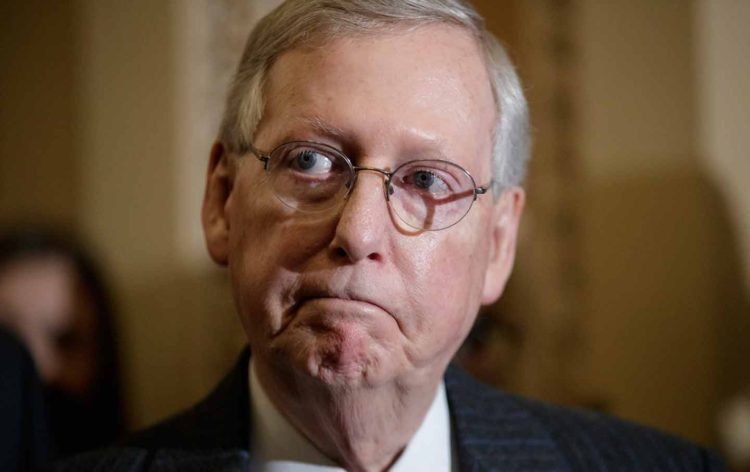 McConnell told reporters, “I think he should step aside,” and added, “I believe the women, yes.”

The Majority Leader’s latest statements about Moore are a departure from what he said just days ago:  “If these allegations are true, he must step aside.”

Shortly after McConnell’s remarks on Monday, Moore’s account tweeted: “The person who should step aside is @SenateMajLdr Mitch McConnell. He has failed conservatives and must be replaced. #DrainTheSwamp.”

A growing number of Republicans are calling on Moore drop out of the race. Bill Cassidy of Louisiana, Steve Daines of Montana, Susan Collins of Maine. Republican Senator Orrin Hatch of Utah said he agrees with McConnell and added he thinks Luther Strange (R-Ala.) would be “an excellent alternative.”

Moore was hand-picked by former White House chief strategist Steve Bannon—who’s currently at war with the GOP establishment and has threatened to primary almost every Republican Senator.

Steve Bannon plans to back primary challengers to almost every Republican senator who runs for reelection next year in an effort to depose Majority Leader Mitch McConnell and streamline Senate voting procedures, three people familiar with his plans said.

Bannon is now using his far-right website, Breitbart, as a vehicle to smear and discredit Moore’s accusers by sending reporters to Alabama to poke holes in the stories that Moore was being sexually inappropriate with minors.

Since the news broke last week, polling between Moore and his Democratic opponent, Doug Jones has reversed. “The most recently released survey, conducted by the Republican-leaning firm JMC Analytics and Polling, shows Jones leading Moore by 4 percentage points.”

It doesn’t appear McConnell’s statement or pressure from Washington has pushed Moore to step aside. In fact, it looks as if Moore is going to war with the GOP establishment—and, at this point, it’s anybody’s game.