March 5, 2018 by Kimberley Johnson No Comments 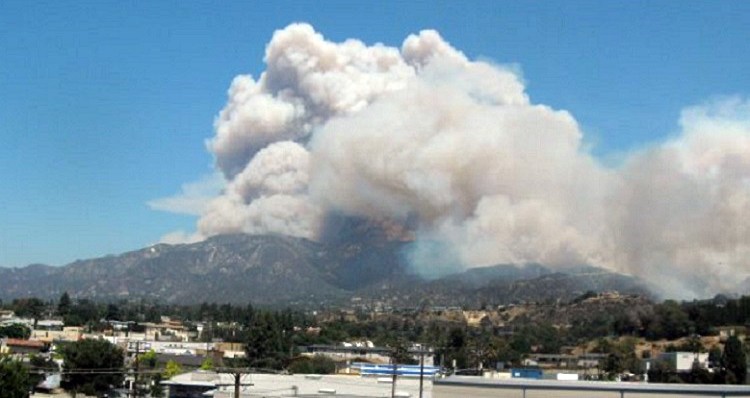 Your beloved gun and garden hose will not serve you when Mother Nature wreaks havoc. Socialism and capitalism can coexist. They have existed together for decades.

In 2009, I lived in the northern tip of the city of Glendale in southern California. My living room wall was almost all window and it faced the San Gabriel mountains. One typically sweltering August morning I smelled fire as I was getting ready for work. When you live in southern California, you get used that smell in the hottest days of summer. I casually walked over to look out my window and was instantly blown away by the sight of a menacing plume of smoke rising from the mountains just northeast of my home. I wasn’t in immediate danger, but it was a little too close for comfort.

After my workday was completed, I drove home in triple digit weather and hoped I wouldn’t find my apartment complex burned to the ground.

Authorities called it the largest wildfire in Los Angeles county’s recorded history. I received numerous robocalls alerting me to the very obvious fact there was huge fire destroying acres of land and that I should pack my car to be ready to leave at a moment’s notice. Those calls freaked me out, but I was grateful for them. I knew if, during the middle of the night while I was sleeping, the fire jumped and made it’s way to my residence, those calls would save my pets and me.

By Friday evening, I was officially petrified, but I was also fascinated. When one is in this kind of situation, one often feels the need to do something – as opposed to just sitting there feeling helpless and freaking out. So I got in my car and drove toward the hills to see the fire up close. I wasn’t alone. There were many fire chasers.

I drove north into the hills of La Canada – a very wealthy, white, conservative neighborhood where homes are spectacular.

After I found a parking spot, I and others hiked up the hill to watch the firefighters do what they do. I had my camera and took many pictures as well as several videos.

One image burned into my brain, and I will never forget it. A man was sitting on his front porch. His car was packed up and he was ready to bolt. Part of the enormous fire was teasing the hills just a few feet away from his home. I don’t know where his family was (if he had one), but he sat alone with a quiet, worried expression. For those who are old enough to remember, the image would have made a great LIFE Magazine cover shot. I didn’t take his picture – it would have been an intrusion, and it just didn’t feel right. But I felt for him. I worried with him.

As I made my way to where the firefighters were – where they had created a burned area barrier in an effort to save the homes – I was incredibly grateful for them. In spite of the intense heat, those heroes and heroines were dressed in their multi-layered uniforms doing everything they could to save homes and lives. They talked with the lookie-loos and kept all of the concerned residents calm. I distinctly remember the overwhelming feeling of calm, despite the sinister flames that taunted us. Those firefighters created the calm.

In the end, they succeeded. The biggest wildfire in Los Angeles history claimed no homes in La Canada. After several days, all that remained was acres of charred land and frayed nerves.

My tax dollars paid the salaries of those skilled firefighters as well as the robocalls that I and others received. It was worth every single penny. I would gladly pay more taxes if I had to. I’ll bet that, if your home were on fire, you would happily pay whatever taxes afforded YOU the comforting knowledge that trained professionals would show up in minutes to save your home, your life, and the lives of the ones you love.

America has many social programs, and all those who are barking about the dangers of socialism have no problem utilizing these programs when it becomes personal. When YOUR house is on fire, you want dependable professionals to help you.

Your beloved gun and garden hose will not serve you when Mother Nature wreaks havoc.

Socialism and capitalism can coexist. They have existed together for decades. One doesn’t cancel out the other. In fact, one can complement the other. The marriage of the two creates a win-win scenario for the people and for the economy.

I enjoy the perks of capitalism (and I’m a leftist-liberal).  I also sleep better at night knowing I can call the police or the fire department if need be – and I’ll just bet you do too. Because whether you care to admit it or not, you are a socialist.

***Hi trolls – I know you’re visiting and getting your knickers in a twist because you know I’m right. But, if you just want to stomp your angry feet and insist socialism is a negative thing, here’s an idea – prove me wrong. If your home catches fire, don’t call the fire department. Get your gun and tell that fire how the 2nd Amendment is all you need.

See how that works out for you.