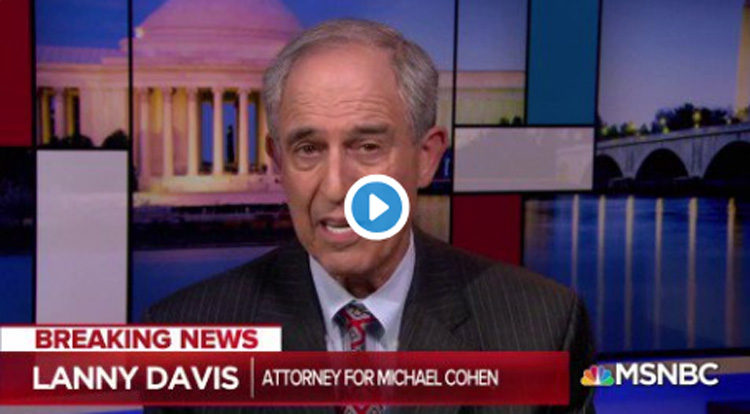 USA Today reported that: “Cohen pleaded guilty to eight counts Tuesday in a surprise hearing in New York that happened within an hour of a jury dropping a guilty verdict on eight counts in the trial against Trump’s former campaign chairman, Paul Manafort.”

The Washington Post added that: “Cohen is the fifth Trump associate to have pleaded guilty or be charged with criminal wrongdoing since Trump took office, including his former national security adviser, his deputy campaign chairman and a former campaign policy adviser.”

Roughly an hour later he posted the following bombshell tweet:

Davis appeared on MSNBC and CNN on Tuesday and explained that Cohen was interested in speaking out about Trump, to include speaking with federal investigators working for Special Counsel Robert Mueller.

“Mr. Cohen has knowledge on certain subjects that should be of interest, and he’s more than happy to tell the special counsel all that he knows,” Davis told MSNBC’s Rachel Maddow.

Referring to the emails that were hacked from the Democratic National Committee and of top aides to political rival Hillary Clinton during the 2016 election, he added that he could tell investigators “not just about the obvious possibility of a conspiracy to collude and corrupt the American democratic system,” but also about his “knowledge about the computer crime of hacking and whether or not Mr. Trump knew ahead of time.”

Following up Wednesday morning, Davis spoke with NPR’s Rachel Martin, telling her that Cohen isn’t interested in receiving a pardon.

“Under no circumstances would he accept a pardon from Mr. Trump,” Davis said, adding that Trump “not only directed a crime, he’s part of a cover up.”

More from Cohen: "He (the President) not only directed a crime, he's part of a cover up."

Also this: "Under no circumstances would he (Cohen) accept a pardon from Mr. Trump."